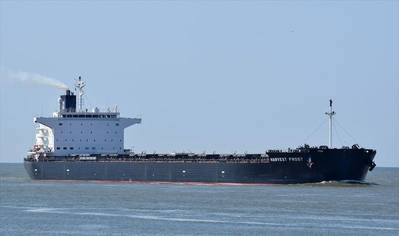 U.S. grains merchant Archer-Daniels-Midland Co said on Tuesday it has carried out the largest soybean shipment in the history of the Ponta da Montanha Grain Terminal (TGPM), located in the northern Brazilian city of Barcarena, as it shipped 84,802 tonnes in a single vessel.

It also represented the largest volume ever shipped on a grain vessel from ports located in the Amazon Basin, the company told Reuters.

"This showed us that we have one more option to move soybeans through the TGPM, using our own vessel... This is definitely something we will do again more often", ADM's South America Logistics Director, Vitor Vinuesa, said in a statement.

ADM-owned bulk carrier MV Harvest Frost, which is 237 meters (777.56 ft) long and 40 meters wide, set sail last week for the port of Rotterdam in the Netherlands, where the company also owns a terminal.

The company said all the soybeans moved will be crushed by ADM itself, obtaining products such as soymeal, cooking oil and biodiesel.

The previous record for shipments from Brazil's northern region was set at the port of Santarem in 2020, when 82,531 tonnes of soybean were moved in a single vessel.