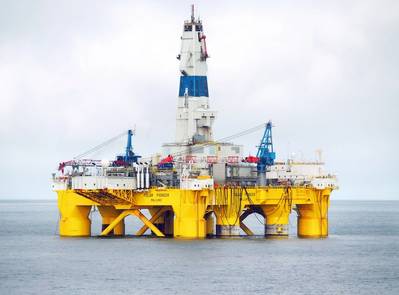 The Obama administration on Friday blocked new exploration for oil and gas in Arctic waters, in a win for environmental groups that had fought development of the ecologically fragile region.
The Department of the Interior released a 2017 to 2022 leasing plan that blocked drilling in the Chukchi and Beaufort Seas off northern Alaska. It also limited petroleum development in the Cook Inlet off south-central Alaska.
Environmental activists have battled drilling in Alaska to protect whales, walruses and seals, and as part of a broader movement to keep remaining fossil fuels in the ground.
The Interior Department said the plan was "balanced," and left 70 percent of economically recoverable oil and gas resources open to drilling, mostly in the Gulf of Mexico.
The plan focuses on the best areas "with the highest resource potential, lowest conflict and established infrastructure - and removes regions that are simply not right to lease," Interior Secretary Sally Jewell said.
President Barack Obama, who last year became the first sitting president to cross the Arctic Circle, has made fighting climate change and protecting the Arctic priorities in his administration.
But President-elect Donald Trump, a Republican who takes office on Jan. 20, 2017, has vowed to open resources to petroleum development and could take steps to reverse the decision.
Oil interests have pressured the administration to explore for energy in the Arctic. Jack Girard, the head of the American Petroleum Institute industry group, said the decision "puts the U.S. at a serious competitive disadvantage."
Russia and Norway have also explored the Arctic, though Exxon Mobil wound down drilling in the Russian north in 2014 due to U.S. sanctions over Moscow's aggression in eastern Ukraine.
Fierce winds and frigid waters make the Arctic treacherous for drilling equipment. After spending billions of dollars to explore the Alaskan Arctic, Royal Dutch Shell retreated in 2015 after suffering a gash in one of its ships and environmentalists had uncovered details of an old law that forced the company to cut exploration there by half.
The U.S. Coast Guard complained when Shell was drilling off Alaska that it had been forced to divert resources, including a vessel that fought cocaine trafficking, to keep operations in the region safe. (http://reut.rs/2g4yHSW)
Environmentalists applauded the new lease plan, which built on a similar decision in March when the government removed much of the Atlantic ocean from oil and gas leasing for five years.
"This is excellent news for our oceans, from the Arctic to the Atlantic," said Jacqueline Savitz, deputy vice president for U.S. campaigns of Oceana, an international advocacy group.
(Reporting by Timothy Gardner; editing by Cynthia Osterman, G Crosse)