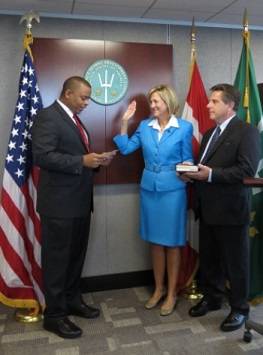 “We are pleased to welcome Betty Sutton to the Department as the new Administrator of the Saint Lawrence Seaway Development Corporation,” said SLSDC Deputy Administrator Craig H. Middlebrook. “She brings a wealth of experience from her years of service at the city, county, state and federal levels of government. She is well versed in the issues of maritime commerce and will be an innovative leader of the SLSDC.”

Administrator Sutton represented Ohio’s 13th Congressional District in the U.S. House of Representatives from 2007–2012. Among her Congressional accomplishments, she spearheaded the successful “Cash for Clunkers” program that created or saved over 60,000 auto industry jobs. Ms. Sutton was a member of the Energy and Commerce Committee and was co-chair of the Congressional Jobs Task Force.

From 2001-2006, she worked as an Attorney at Faulkner, Muskovitz, & Phillips LLP. Ms. Sutton was a Representative in the Ohio State House of Representatives from 1993-2000. From 1991-1993, she was a member and then Vice President of the Summit County Council. Ms. Sutton served as a member of the Barberton City Council from 1990-1991. She received a B.A. from Kent State University and a J.D. from the University of Akron School of Law.