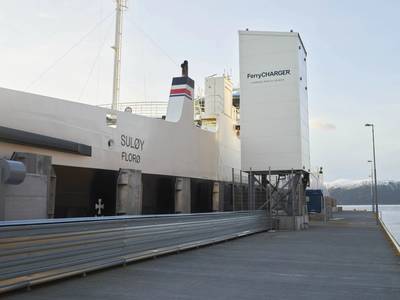 The electric ferry Suloey is about to dock at the Hareid ferry terminal in Norway following a trip made in headwinds that required high energy usage.

“There is a need for proper charging after such a trip,” states the captain of the ferry, which has been fitted with equipment for propulsion, automation and charging by Norwegian Electric Systems (NES).

With a simple touch on the charging display, the charging tower on shore connects to the ferry within a few seconds. Close to five million watts of charging power ensures that the batteries on board get recharged. After six minutes, the charging system disconnects and Suloey sets course over to Sulesund again.

Suloey, together with Hadaroey and Giskoey, makes an important contribution to reducing emissions in maritime transport. The transition from diesel driven ferries to all-electric ferries on the Hareid-Sulesund crossing will ensure an annual reduction in CO2 emissions of as much as 7,000 tonnes, equivalent to 3,800 cars.

These days, NES is handing over the charging stations at Hareid and Sulesund to Norway's largest ferry company Fjord1. The charging system is based on the latest power conversion and transmission technology. Good cooperation with the local grid company MoereNett, Fjord1 and other parties has made it possible to put the ferry route into full-electric operation. Calculations were made on both ferry terminals, which showed that the existing power grid would need extra power to achieve the necessary charging power. The power grid was strengthened on both sides and in combination with installation of batteries and the latest in converter and power control technology, the parties found the optimal solution.

The systems on board and ashore act as a single system. When the ferry approaches the charging station, information about the energy consumption used on the trip will be sent to the shore station. In addition to this information, the system will also check the power grid and adjust the system so that no voltage disturbances occur.

The charging system is designed to minimize voltage disturbance and reactive power is fed back to the grid during charging to maintain grid-voltage level. Calculations done in the system will also ensure that the charging power is adjusted to transfer only the needed energy. Optimal charging power will ensure that unnecessary wear on batteries and power electronics is avoided, both on board and on shore.

The system is also equipped with Remote Access which gives employees in NES access to monitor the entire sequence from its head office in Bergen. They can support the crew if any challenges should occur in the operation. NES also delivers operational data continuously to a cloud based solution, so that Fjord 1 can have a full overview of consumption and operation. In addition, the charging system can be configured to reduce peak power and limit the amount of energy from the grid for a short period of time when, for example, the price for electricity is high.

In total, the charging stations on this ferry route will carry out approx. 32,000 charging operations each year and transfer approximately 1,1200 MWh per year. 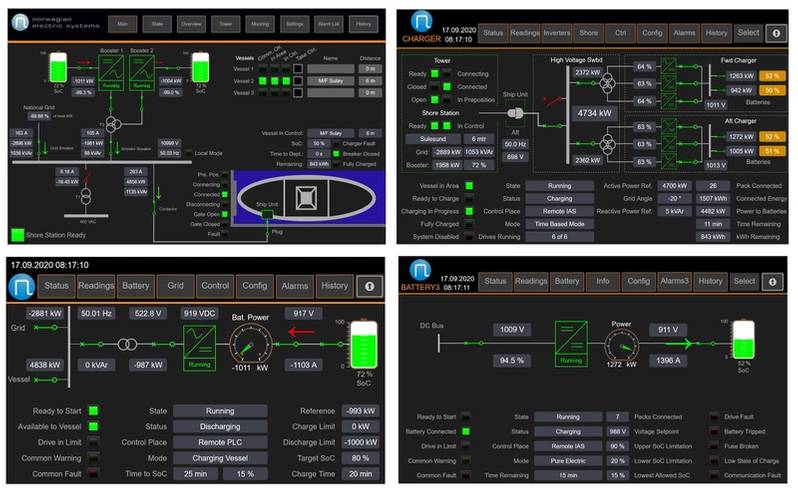 A project to produce a novel emissions-slashing hydrogen passenger ferry has been granted €8 million ($9.4 million) in European…