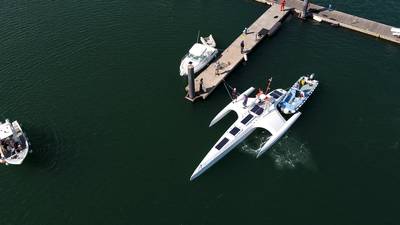 The Mayflower Autonomous Ship is scheduled to cross the Atlantic Ocean in 2021. (Photo: IBM)

A new Mayflower has been launched in Plymouth, 400 years after its historic namesake set sail from southwest England to America.

The new vessel won't be carrying pilgrim settlers across the Atlantic. In fact, it won't hold any crew or passengers at all. The sleek AI- and solar-powered trimaran is autonomy level five, meaning it can operate independently with no human intervention. Next year, it will embark on the famous ocean voyage from Plymouth, England to Plymouth, Mass. completely autonomously, gathering vital environmental data.

Two years of design, construction and AI model training has culminated in the 50-foot Mayflower Autonomous Ship (MAS) being launched into the waters off the coast of Plymouth, England on Tuesday ahead of its official launch Wednesday.

Originally, the ship was supposed to make the transatlantic crossing this year, but the voyage has been rescheduled to 2021 after construction delays caused by the coronavirus pandemic. Over the next six months, the ship will undergo sea trials and various research missions and voyages locally before attempting to cross the Atlantic Ocean in the spring.

Enabling technologies
The autonomous research vessel has the ability to sense, think and make decisions at sea without a human captain or crew on board. This is thanks to an AI Captain built by developers at ocean research non-profit ProMare and tech giant IBM, who leveraged IBM's latest advanced edge computing systems, automation software, computer vision technology and Red Hat Open Source software.

"Able to scan the horizon for possible hazards, make informed decisions and change its course based on a fusion of live data, the Mayflower Autonomous Ship has more in common with a modern bank than its 17th century namesake," said Andy Stanford-Clark, Chief Technology Officer, IBM UK & Ireland. "With its ability to keep running in the face of the most challenging conditions, this small ship is a microcosm for every aspiring 21st century business."

ProMare, IBM and the other companies behind the ambitious project say the new-generation Mayflower is intended to make gathering ocean data safer, more flexible and cost-effective. The partners hope the vessel will lead the way for scientists and other autonomous vessels to help improve understanding of issues such as global warming, micro-plastic pollution and marine mammal conservation.