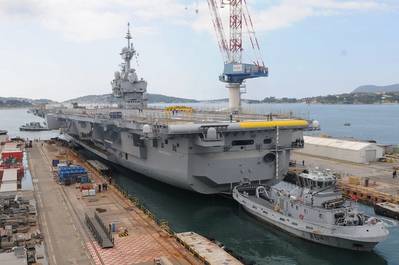 Photo courtesy of The Naval Group

The sole prime contractor for the entire mid-life refit of the Charles de Gaulle aircraft carrier, Naval Group, said it has returned the vessel to the French Navy. The vessel will now start ramping up its systems before returning to its operational cycle.

Designed and built by Naval Group and entering service in 2001, the Charles de Gaulle aircraft carrier, further to its modernization, has now entered the technological era of the 21st century. This mid-life refit included unprecedented renovations and a density of work that gave the project a level of complexity unseen until now. This veritable industrial challenge required exceptional organisation to achieve the real-time coordination of the entire project, Naval Group’s core business.

The program was conducted by “Team France” bringing together the DGA, the French Navy, the SSF, the aircraft carrier’s crew and actors from French industry. Naval Group worked with major Defense original equipment manufacturers such as Technicatome, Thales or Safran, generalist companies but also SMEs originating mainly from the local and regional industrial fabric.

The aircraft carrier entered dry dock in February 2017; it was floated out in May 2018 and at the end of July 2018 it docked at its operational quay for harbor acceptance trials. It then performed sea outings for the trials that must be performed in operational conditions, with the support of other French Navy entities. The final date on which the vessel was made available was 16 October 2018, after the complete recertification of the systems was completed.