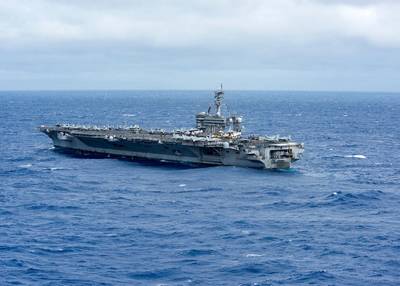 Prior to their operations in the South China Sea, ships and aircraft from within the strike group conducted training off the islands of Hawaii and Guam to maintain and improve their readiness and develop cohesion as a strike group. The strike group recently enjoyed a port visit to Guam and after departing the Marianas, conducted operations in the Philippine Sea.
"The training completed over the past few weeks has really brought the team together and improved our effectiveness and readiness as a strike group," said Rear Adm. James Kilby, commander, CSG 1. "We are looking forward to demonstrating those capabilities while building upon existing strong relationships with our allies, partners and friends in the Indo-Asia-Pacific region."
Vinson last deployed to the Western-Pacific in 2015 and conducted a bilateral exercise with the Royal Malaysian Navy and Royal Malaysian Air Force in the South China Sea. Vinson first operated in the South China Sea in 1983 and in total, has operated there during 16 previous deployments over its 35 year history.
While deployed, the Carl Vinson CSG will remain under U.S. 3rd Fleet command and control, including beyond the international dateline, which previously divided operational areas of responsibility for 3rd and 7th Fleets.
Third Fleet operating forward offers additional options to the Pacific Fleet commander by leveraging the capabilities of 3rd and 7th Fleets. This operational concept allows both numbered fleets to complement one another and provide the foundation of stability in the Indo-Asia-Pacific region.
CVW-2 includes the "Black Knights" of Helicopter Sea Combat Squadron (HSC) 4, the "Blue Hawks" of Helicopter Maritime Strike Squadron (HSM) 78, the "Bounty Hunters" of Strike Fighter Squadron (VFA) 2, the "Blue Blasters" of VFA-34, the "Kestrels" of VFA-137, the "Golden Dragons" of VFA-192, the "Black Eagles" of Carrier Airborne Early Warning Squadron (VAW) 113, the "Gauntlets" of Electronic Attack Squadron (VAQ) 136 and the "Providers" of Fleet Logistic Support Squadron (VRC) 30.