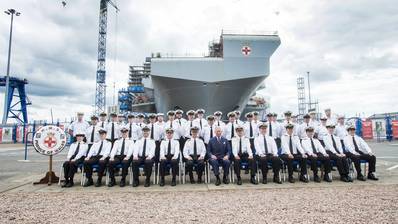 The second of the largest warships ever built for the U.K. Royal Navy, the Queen Elizabeth Class carrier HMS Prince of Wales, was given the royal seal of approval when HRH The Prince of Wales, (or Duke of Rothesay, as he is referred to in Scotland), visited Babcock’s Rosyth Facilities and signaled for the final section to be lowered into place, shipbuilder BAE Systems announced.
The 570-metric-ton block – known as Sponson 11 – was the final section of the 280-meter-long warship to be manufactured. HRH Duke of Rothesay gave the order for the massive section, which includes part of the flight deck, to be lowered into place by the Goliath crane. This allows the final welding to start in order to make the carrier structurally complete.
“By the end of July we will have finished welding the final section together and the ship will be structurally complete,” said Ian Booth, Managing Director of the Aircraft Carrier Alliance. “The team will now embark on the next phase of the ship’s construction. This involves extensive outfitting, testing and commissioning of her propulsion and mission systems, as the ship is brought to life. The ship will then start her harbor trials here in Rosyth before setting off for sea trials in 2019.”
Captain Ian Groom MBE, Senior Naval Officer for HMS Prince of Wales, said the milestone draws the construction phase of the Royal Navy's second Queen Elizabeth Class aircraft carrier to a close. “The focus now moves to commissioning the ship and my team will continue to work with their industry partners to bring her to life ahead of sea trials,” Groom said.
John Howie, Chief Executive – Marine & Technology Division, Babcock International, and a member of the Aircraft Carrier Alliance’s Management Board, said, “This moment marks the end of eight years of manufacturing for the Queen Elizabeth Class program at our six shipyards across the U.K.”
More than 10,000 workers have contributed to the design and build of the Queen Elizabeth Class carriers, Howie said.
HMS Prince of Wales is scheduled to be delivered in 2019.