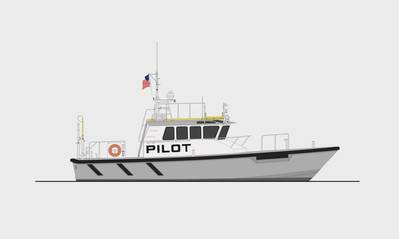 The Alabama Pilot, Inc. in Mobile, Ala., has ordered its second Chesapeake Class high-speed pilot boat from Gladding-Hearn Shipbuilding, Duclos Corporation. Delivery of the new 53-footer is set for mid-2023. Delivery of its first Chesapeake launch, Dixey, was in 2017.

With a length overall of 53.6’, a beam of 17.8’, and a draft of 4.6’, the all-aluminum pilot boat features the Ray Hunt Design deep-V hull. It will be powered by twin Caterpillar C-18 diesel engines, each delivering 671Bhp at 2100 rpm and a top speed of 25 knots. A Humphree interceptor, with automatic trim optimization, will be installed at the transom. Diesel capacity is 800 gallons, which shipyard officials say, will provide a range of at least 380 miles at an economical speed of about 20 knots.

The wheelhouse, flush-mounted to the deck amidships and with forward-leaning front windows, will be outfitted with six Llebroc pilot seats, one at the centerline helm station and the observer’s seat to port and four single pilot seats, aft of the helm station. The forecastle will include a reclining seat and upholstered settee, with storage below. The wheelhouse and forecastle will be cooled by two 16,000 Btu air-conditioning units.

Outside of the wheelhouse are wide side-decks, side and rear doors, and boarding platforms on the roof. At the transom are throttle and steering controls, and a winch-operated, rotating davit over a recessed platform for rescue operations.