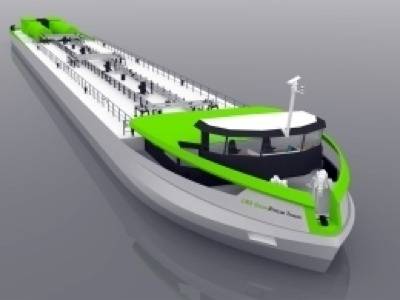 Alewijnse Marine Systems celebrated their involvement in the success of the award-winning 'LNG Greenstream' waterway tankship at the recent 16th KNVTS Maritime Awards Gala held in The Netherlands. Alewijnse say that the 110m 'Greenstream' is the first commercial inland vessel to use LNG‐electric propulsion.

The vessel was built by Peters Shipyards, Kampen, and Alewijnse was responsible for the entire electrical installation on board, including the systems that control and regulate the LNG‐fuelled generators.

Alewijnse designed and installed a propulsion system based around four LNG‐powered gensets by Sandfirden, capable of generating 285 kW each. These supply electrical power to the two propulsion engines as well as to the associated electrical infrastructure. However, at the heart of the system lies a special DC bus designed by Alewijnse and supplied by a maximum of four generators through an AC/DC converter, which allows the generators to run at different speeds simultaneously, giving greater flexibility and greater fuel economy.

The generators also do not require synchronisation, thereby delivering power just a few seconds after one of more additional units are brought on line, even before they reach their nominal speed.

“We are delighted that the awards committee recognised the capabilities of the Greenstream and her state‐of‐the‐art systems,” said Jan Oud, Managing Director of Alewijnse Noord. “This was very much unexplored territory for all those in the development partnership, but the challenges were overcome. The result is proof that LNG‐electric inland vessels have a bright future ahead with their ability to meet the low emissions targets prevalent on inland waterways.”

The second vessel was delivered in the summer of 2013. Both are chartered by Shell and operated by Interstream Barging on the Rhine.

A liquefied natural gas (LNG) tanker which loaded a cargo from the United States is currently heading to China, the first shipment since March 2019…