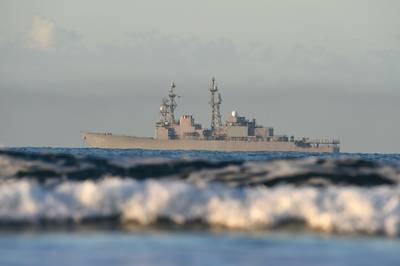 The SDTS traveled to San Diego, where it took on approximately 30,000 gallons of two types of alternative fuels. The ship then proceeded on a normal cruise, demonstrating that the alternative fuels could function as a drop-in replacement, requiring no changes to equipment or operating procedures. The two fuels were developed using different methods: Synthetic Iso-Paraffin (SIP) and Catalytic Hydrothermolysis Conversion Diesel (CHCD).
SIP is a fuel derived from alternative feedstock and blended with military-grade petroleum-based fuel, known as F-76, with 20 percent non-petroleum sourced. CHCD is a military grade drop-in replacement for traditional F-76 that is 100 percent non-petroleum sourced.
“The goal is to qualify as many alternative fuel sources as possible,” said Diane Mattingly, in-service engineer with Naval Surface Warfare Command, Philadelphia Division. “A range of operational fuel sources will give our mission planners and commanders increased operational flexibility.”
The objective of this particular test was twofold; first, to demonstrate that these alternative fuels are drop-in replacements for petroleum-sourced F-76- meaning they require no equipment modifications or operational modifications by the crew; second, to ensure that approved alternatively-sourced fuels perform equally to, or better than, existing petroleum-sourced fuels.
For this mission, the alternatively-sourced fuels were loaded into the two gas-turbine engines and the two gas-turbine generators. The test period lasted approximately 12 hours along the Southern California Coast, while returning to Port Hueneme.
While under the power of the alternatively-sourced fuels the ship successfully completed multiple engine starts and speed changes. There were no mechanical, operational or qualitative differences when operating on either fuel. The data collected from the trial will be fully analyzed and coupled with borescope results into a final report.
In-service Engineers, Martin Quinones and Diane Mattingly from NSWC Philadelphia Division embarked with the SDTS to monitor operations and ensure the alternatively-sourced fuels performed as intended.
Quinones and Mattingly monitored the performance of the gas-turbine engines while running on F-76, prior to taking on the alternatively-sourced fuels, to establish a baseline for further monitoring when the other fuels were in use.
Prior to testing aboard the SDTS, the fuels went through fit-for-purpose, component and full-scale engine testing. The component and full-scale engine testing included performance tests to determine the combustion quality and emissions.
The project was a collaborative effort involving the Deputy Assistant Secretary of the Navy Energy Office (DASN Energy), Naval Sea Systems Command (NAVSEA), Naval Air Systems Command (NAVAIR), Naval Supply Systems Command (NAVSUP), Defense Logistics Agency (DLA), NSWC PHD and NSWC Philadelphia Division.
“These trials would not have been successful without the combined support from DASN Energy, NSWC PHD, NSWC Philadelphia Division, NAVAIR, NAVSUP and DLA,” said Mattingly.
Each organization that provided support to the test is involved in either Department of Defense or Department of the Navy energy initiatives.
The SDTS is an asset of NSWC PHD. An all-civilian Port Hueneme crew of approximately 40 personnel operated the vessel while underway. Approximately 70 additional personnel rode the vessel in support of the test.
NSWC Philadelphia Division has been involved in fuel testing from the start as the lead for the fit-for-purpose, component and full-scale engine testing, which was conducted in a laboratory setting. Quinone rode the ship in 2011 for the first platform test and has been involved in the project from the very beginning.
Test and evaluation and in-service engineering are aligned with NSWC PHD's mission statement and the SDTS continues to be a platform which supports the future of the Fleet. Since 1963, NSWC PHD has provided highly-skilled personnel and state-of-art facilities and assets to develop and support the Navy's surface ship warfare systems.
In October 2009, Secretary of the Navy Ray Mabus directed the Navy to decrease its reliance on fossil fuels and set the goal of at least 50 percent of the Navy's energy consumption coming from alternative sources by 2020.
The alternative fuels were to come from non-food sources, be compatible with all existing hardware and not compromise performance, handling or safety. The use of alternatively-sourced fuels would improve the Navy's energy independence and lessen environmental impact.
In 2011, the SDTS tested 15,000 gallons of a 50/50 blend of fuel and it was a success. There were no adverse effects in the gas path of the gas turbines. The fuel was tested in one of the SDTS' ship-generator sets and one propulsion engine.