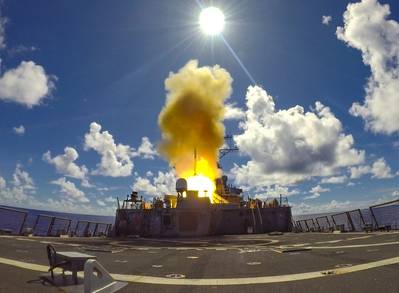 The Arleigh Burke-class guided-missile destroyer USS Barry (DDG 52) launches a Standard Missile (SM) 2 during a live-fire missile exercise as part of Pacific Vanguard (PV) 22 while operating in the Philippine Sea. PV22 is an exercise with a focus on interoperability and the advanced training and integration of allied maritime forces. (U.S. Navy photo by Mass Communication Specialist 1st Class Greg Johnson)

IMO announced that the Indian Ocean High Risk Area (HRA) will be removed on 01 Jan 2023. It was a rare but really reassuring example that international cooperation can be successful.

Meanwhile at the time of this writing, the war in Ukraine carries on. Ukranian resistance has been bolstered by very significant western democracy support in the form of weapons supply that have done a great job of stopping Russia in its tracks. However, the Ukranian Crisis shows it is extremely difficult to provide support against powerful foreign invaders to non-treaty friendly nations.

If a friendly supporter is not willing to commit actual fighting forces, the only support that can be provided is the supply of arms to the country defending itself against a potential invader.

The reality is that these arms are only useful if an invasion occurs, and when a threatened country is inherently weaker than the potential invader, the country cannot bring these arms to bear effectively to stop the invasion.

This conundrum can be solved if one were to take a different approach to arms supply that more closely resembles a Just in Time, or more accurately, an Amazon home delivery approach.

Instead of shipping missiles to a country, it makes more sense to have the arms supplier warehouse the arms at a readily available distribution point from which the threatened country can order arms for ready deployment as needed.

In real terms this would mean that an arms supplier would position a suitably loaded ship (or truck or aircraft) with arms and arms deployment gear near the threatened country, and, after proper financial arrangements have been made, the threatened country can ask the arms supplier to deliver ordinance and missiles to locations they select within their country only when needed. If an invasion occurs, the arms supplier would simply light of missiles, etc. for the delivery location within the invaded country. 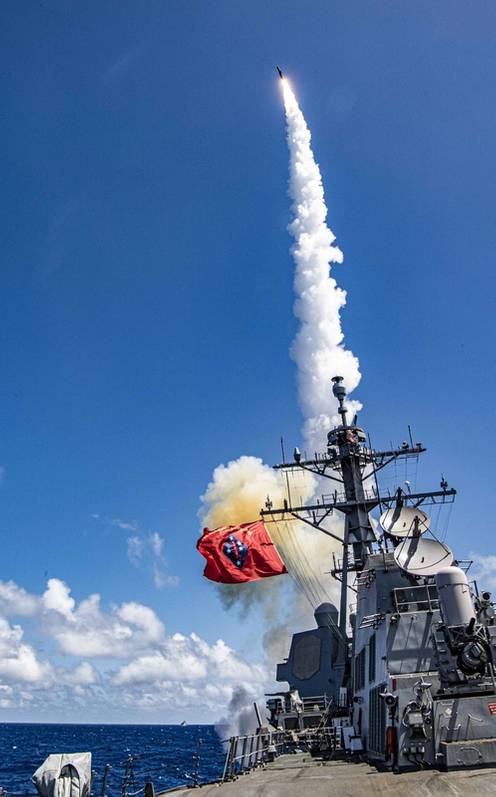 Arleigh Burke-class guided-missile destroyer USS Chafee (DDG 90) launches an SM-2 missile alongside ships from the Royal Canadian Navy as part of a surface to air missile exercise during Rim of the Pacific (RIMPAC) 2022, July 19, 2022. Twenty-six nations, 38 ships, four submarines, more than 170 aircraft and 25,000 personnel are participating in RIMPAC from June 29 to Aug. 4 in and around the Hawaiian Islands and Southern California. (U.S. Navy photo by Mass Communication Specialist 2nd Class Gwendelyn L. Ohrazda)

I first suggested this idea to my maritime colleagues in my office who sounded skeptical, but further discussion made them realize that while this approach is novel to say the least, it appears to fit within reasonable international standards of trade, law and warfare.

Let’s further define what would take place. Let’s say an Arleigh Burke destroyer is parked off the coast of Ukraine with a nice and flexible collection of missiles.

The Ukrainian government has a purchase agreement for these missiles, but asks the US to keep them stored aboard their vessel until they are needed.

The US will never launch these missiles to target countries that do not agree to have them explode within their own country. As such, in the Ukranian war they would not land in Russia since that would be an act of war. However, when Russian forces cross into Ukraine, there is no restriction of law for Ukraine to ask these missiles to be delivered on targets they select anywhere within their borders.

The US delivers the missiles to coordinates or objectives selected by Ukraine within Ukraine, and no other countries can make any claim with regard to acts of aggression or acts of war by the US or Ukraine.

Russia may choose to engage the US delivery ship, but that is a violation of international trade and an act of war no different than intercepting a US ship that is delivering an arms shipment to a Ukrainian port.

The only difference between the delivery of arms to Ukraine’s border, and delivery of the arms to locations within the country selected by Ukraine is that this just-in-time Amazon approach by the Arleigh Burke is more efficient and effective.

A similar approach can be taken with drone aircraft from carriers. The drones are owned and operated by Ukrainians, but serviced and armed by the arms supplier.

While this approach is scary to say the least once the shooting has started, interestingly the prior international establishment of this approach can be extremely effective as a deterrent against foreign invasion in the future.

This approach takes little treaty work and can be very fluid, which tends to be a game theory advantage. As such, if internationally accepted, any country can provide this approach to any other country of their borders are threatened. If this approach had been in place, Ukraine could have invited friendly countries to provide arms stores in international waters in the form of international navy ships with various missile loads and this would have been an additional reason for Russia to think twice about invading Ukraine.

Oddly, in concept, this approach is not dissimilar to the international Navy approach in fighting pirates. When closely considered, it is not new law, but rather an extension of international law due to newly developed delivery approaches.

If this concept is certified under international law, any country with a delivery capability can assist any country with a targeting capability against invasion. This means that a small country can contract with a larger country, or a group of countries, to overwhelmingly provide this service against an invasion of their territory.

Since this force cannot be projected outside a contracting country’s territory, it is a purely defensive deterrent and, as such, a stabilizing force and deterrence against invasion. Interestingly this approach is more effective as far as defensive certification is concerned than conventionally supplying arms to a threatened country before the invasions starts, since, once the arms are conventionally delivered to a country they can also be used for offensive purposes outside their country, which can then be interpreted as aggression by opponents.

Furthermore, this approach serves any country equally, Russia can as easily use it against invasion of their territory (or territory of their friends) as the United States or China can. (Although it does require friendly nations and that by itself is an interesting reason to keep a nice collection of capable friends.)If the United States adopts this approach as part of their defense doctrine (which actually is a minor extension of the NATO doctrine, without all the treaty and cost issues) it would effectively remove any argument that another country can make against the US (or NATO) as a potential aggressor. Interestingly this approach would have allowed the invasion of Afghanistan, but not the invasion of Iraq, which, in hindsight, would have serves us well.

While I claim no specialized knowledge in the legal details, from a game theory point of view this approach has many attractive features and warrants further study.

The real significance in this approach lies with the fact that it can only deal with invasions of sovereign territory. This Amazon approach to warfare strongly enhances deterrence against border violations and invasions, but does not extend to, or involve itself in civil wars or existing border disputes. However, it is an inexpensive and direct force against international aggression.

It would not inherently prevent Russia from remotely bombing Ukraine into submission, but it would prevent, or at least make it very unattractive for Russia to occupy the territory.