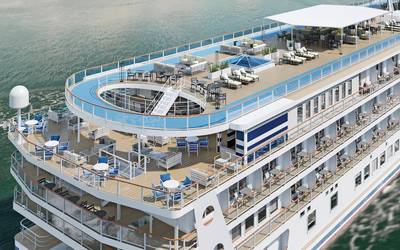 U.S.-based river and coastal cruise operator American Cruise Lines announced on Tuesday that it has signed contracts with Chesapeake Shipbuilding of Salisbury, Md., to build two more modern riverboats in 2022. The newbuilds will be the fifth and sixth in American Cruise Lines revolutionary modern series, first introduced in 2018. Both vessels are yet to be named and will follow the 2021 debuts of American Jazz and American Melody on the Mississippi River.

“American’s two newbuilds are welcome news for the industry here at home. They closely follow the two riverboats we are introducing this year and demonstrate our ongoing commitment to growth and leading the U.S. small ship market,” said Charles B. Robertson, President & CEO of American. “While the pace of our newbuilds is increasing, we are committed to maintaining the small capacity of our ships, which continue to accommodate just 100-190 passengers.”

American’s fifth and sixth modern riverboats will be sister ships to 175-passenger American Melody, beginning operations on the Mississippi this August.