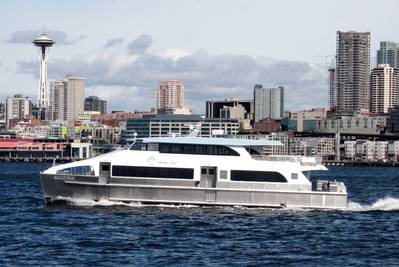 All American Marine, Inc. (AAM) today announced the delivery of a new passenger ferry that will serve the city of Seattle.

The vessel, MV Sally Fox, was dedicated at a ceremony on Vashon Island on Saturday. The Sally Fox is the first of two new ferries ordered by King County’s Marine Division as replacement vessels for their scheduled water taxi service.  All American Marine was awarded the contract and issued the Notice to Proceed for the identical vessels at the start of 2014.

The new ferry will operate in the Puget Sound and will provide passenger-only service from Vashon Island to downtown Seattle.  The sister vessel, MV Doc Maynard is still under construction at All American Marine and is set to be delivered this fall for operations from West Seattle to downtown.

“We are honored to have this opportunity to construct world-class passenger ferries that are fuel efficient, dependable, and cost-effective,” stated All American Marine CEO, Matt Mullett.  King County’s two new vessels will be supported by a third All American Marine built catamaran, Spirit of Kingston, which was acquired by the County in 2013.

AAM partnered with naval architecture firm, Teknicraft Design Ltd., of Auckland, New Zealand for the hull design.  Each 105’ x 33’ aluminum catamaran features an advanced hull shape that was custom designed using digital modeling and Computational Fluid Dynamics (CFD) analysis testing. The hull design is complemented by Teknicraft’s signature integration of a wave piercer that is positioned between the catamaran sponsons to break up wave action and ensure reduced drag while enhancing passenger comfort.

The water taxi is powered by twin Cummins QSK-50 tier III engines, rated 1800 bhp @ 1900 rpm to provide a service speed of 28 knots.  The design features interior seating for 250 with 28 additional outdoor seats available on the upper aft deck.  The main deck is ADA-accessible and the cabin includes designated seating areas for those with disabilities.  The aft deck includes a staggered height bicycle storage rack with accommodation for 26 bicycles.  As an environmentally friendly alternative to paint, the decks are covered with peel-and-stick non-slip tread and the exterior of the superstructure is wrapped in UV-stable vinyl.