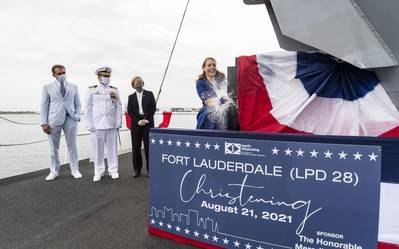 “Shipbuilding is about teamwork and bringing together the most intellectually and physically challenging efforts we can imagine for a common purpose,” Ingalls Shipbuilding President Kari Wilkinson said. “We each leverage our essential and unique abilities to estimate, engineer, plan, procure, fit, weld, install, test and ultimately deliver a ship that is so much more than just a product. I consider everyone here today and watching from other places to be a part of that resilient and resolute team. We are now, together, a part of the legacy of the future USS Fort Lauderdale.”

LPD 28 is named Fort Lauderdale to honor the Florida city’s historic ties to the U.S. Navy, which date back to the 1830s and include an important naval training center during World War II.

Dean Trantalis, the mayor of Fort Lauderdale, was the keynote speaker.

“Fort Lauderdale has had a close, long connection to the armed services,” Trantalis said. “The people of today who serve in our military, especially in the Navy, have come to understand and appreciate the city of Fort Lauderdale. I want to thank those men and women who serve in our armed services. Thank you for your gallantry, and for the commitment and sacrifice that you and your families make on behalf of each and every one of us who live in the United States.”

“Once delivered, this ship will join our Navy/Marine Corps team and expand the advantage we have against our adversaries,” Galinis said. “There are few nations that can build ships like this. Our United States shipbuilding industrial base is the envy of every major Navy in the world. The talents and skills of our shipbuilders, combined with the tenacity and toughness of our sailors and Marines, make this team second to none.”

The ship’s sponsor, Meredith Berger, christened the ship with a bottle of sparkling wine. Berger served as deputy chief of staff under former Secretary of the Navy Ray Mabus, and currently serves as assistant secretary of the Navy for energy, installations and environment.

“We are finally here together to celebrate the christening of the USS Fort Lauderdale,” Berger said. “In these times, together doesn’t quite look like what it used to. Some of us are here at Ingalls, some are watching remotely from home, but we are all together in spirit. Through our ties to this ship, we strengthen the relationship between the military and the nation.”