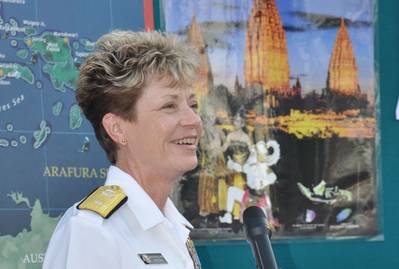 The U.S. Senate on Tuesday confirmed Ann C. Phillips as Administrator of the U.S. Maritime Administration (MARAD), filling a position that has been left vacant at the Department of Transportation (DOT) since January 2021. Phillips was confirmed by a vote of 75-22.

Phillips, a retired U.S. Navy rear admiral, takes over as head of the DOT's maritime agency amid continued shipping and supply chain disruption as well as historic levels of government funding for maritime and port infrastructure projects. She succeeds Mark Buzby, who resigned from the role in the wake of the insurrection at the U.S. Capitol in January 2021. Lucinda Lessley has been serving as MARAD's acting administrator since January 20, 2021.

President Joe Biden nominated Phillips for the role on October 14, 2021, and the Senate's Commerce Committee held hearings on her nomination on December 16. The nomination was returned to the President when it expired at the end of the year, and Biden resent it January 4, 2022. The committee favorably reported the nomination to the entire Senate floor on February 2.

Phillips served nearly 31 years on active duty in the U.S. Navy before retiring as a Rear Admiral. Her final Flag command was as Commander, Expeditionary Strike Group TWO, including 14 ships and 10 subordinate commands – all the Amphibious Expeditionary Forces on the U.S. East Coast. Earlier she served on the Chief of Naval Operations’ Staff as Deputy Director and then Director of Surface Warfare Division, commissioned and commanded USS Mustin (DDG 89), and commanded Destroyer Squadron 28.

MARAD promotes the use of waterborne transportation and its integration with other segments of the transportation system, and the viability of the U.S. merchant marine. The agency works in many areas involving ships and shipping, shipbuilding, port operations, vessel operations, national security, environment and safety, and it is charged with maintaining the health of the merchant marine. MARAD also maintains the National Defense Reserve Fleet (NDRF) as a ready source of ships for use during national emergencies and logistically supporting the military when needed.

"We look forward to working with Admiral Phillips to ensure our nation has the shipbuilding, sealift capacity, and reliable movement of commerce that is essential to America’s security," Park said.