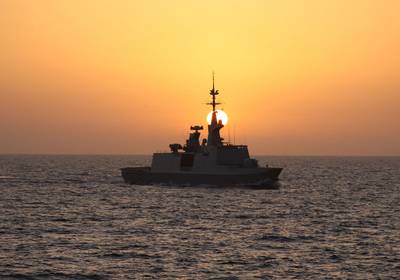 Just 12 days after EU Naval Force warship BNS Louise Marie apprehended five suspect pirates at sea off the Somali Coast, the Belgium frigate has once again located a suspect skiff - this time with three men on board.
The warship, which is operating as part of the European Union’s counter-piracy mission - Operation Atalanta, has maintained a constant sea watch during the past weeks in the waters off the Horn of Africa to help protect vessels from pirate attack.

During this latest incident, the skiff was located early morning on Thursday 27 December 400 miles off the Somali Coast by a Swedish EU NAVFOR maritime patrol aircraft.  BNS Louise-Marie was tasked to conduct a surface search and was able to quickly locate the vessel.  Upon arrival at the scene the warship’s boarding team was deployed to apprehend the three suspect pirates.

After the men were taken on board BNS Louise Marie, analysis of the event was undertaken and evidence collected.  Earlier today, having looked at the evidence available, the decision was taken to put the men ashore on to a Somali beach.

Speaking about this latest counter-piracy operation, Rear Admiral Gualtiero Mattesi, the Deputy Operation Commander of the EU Naval Force said “EU Naval Force’s continued vigilance over this period has paid dividends.  BNS Louise Marie’s crew was able to quickly locate these men, and with reasonable grounds to suspect piracy, quite rightly took away their equipment that they may have used to prey on ships at sea.  The EU always seeks, where possible, a legal finish, however, this time, whilst there were reasonable grounds to suspect piracy, it was felt that there was insufficient evidence to secure a prosecution.  The European Union’s intent is clear - to be tough on piracy, whilst helping Somalis to regain peaceful control of their own country”.