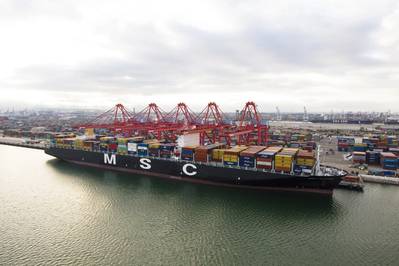 The Port of Long Beach’s Harbor Commission on Wednesday approved an agreement to replace the bankrupt operator of its largest cargo terminal.

The Long Beach Board of Harbor Commissioners greenlighted the move by a subsidiary of Mediterranean Shipping Co. (MSC) to take over sole control of the long-term lease of the port’s 381-acre Pier T container terminal from from Hanjin Shipping, a South Korean ocean carrier that declared bankruptcy on August 31. Previously, MSC held a minority stake in the lease for Pier T, where more than a quarter of the Port’s container cargo is moved.

In 2015, Hanjin accounted for about 12 percent of the containers that moved through Long Beach.

Board of Harbor Commissioners President Lori Ann Guzmán said that while Hanjin’s bankruptcy was unfortunate, the approved agreement is a worthy deal to bring steady business to one of the country’s premier container terminals.

“This decision comes at a crucial time. With all of the changes that have taken place in the shipping industry in recent years, certainty is very important,” Guzmán said. “Although we regret the loss of a long-term partner in Hanjin Shipping, we look forward to the opportunities that Terminal Investment Limited, Mediterranean Shipping Company, Hyundai Merchant Marine and their ‘2M Alliance’ partners will bring to Long Beach.”

Terminal Investment Limited earlier this week announced it had signed an agreement to purchase Hanjin Shipping’s stake in the terminal operator at Pier T. The South Korean bankruptcy court sought approval from U.S. authorities, including the Port of Long Beach.