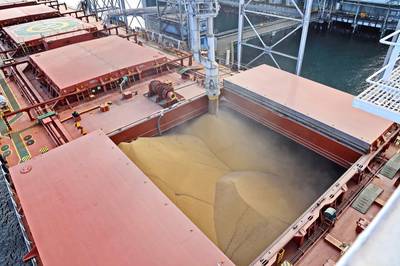 Argentine oilseed workers and grains inspectors said on Wednesday they will spend Christmas on strike, further bogging down agricultural exports by extending a work stoppage that started on Dec. 9.

"We and our families will spend Christmas on strike," said the two unions in a joint statement.

"For 15 uninterrupted days we have been on strike due to the intransigence of agro-export companies that refuse to pay us what we are owed for 2020 and grant a decent raise in 2021," they said.

Most of Argentina's agricultural port facilities have been affected by the strike, along with most international export companies operating in the country.

SOEA official Daniel Succi told Reuters that the new offer "was not enough." The labor groups say they want pay increases big enough to compensate employees for high inflation and the risk of working during the COVID-19 pandemic.

For two weeks due to the strike no soybean trucks have entered terminals at Argentina's main grains hub of Rosario, from which about 80% of Argentina's farm exports are shipped. CIARA-CEC said more than 100 cargo ships have been unable to load during the strike.

Late in the day on Tuesday, unions linked to Argentina´s maritime and port sector announced that in a gesture of solidarity they too would start a 36-hour strike beginning Wednesday morning in support of their fellow workers.

Argentina is the top international supplier of soymeal, livestock feed used to fatten hogs and poultry from Europe to Southeast Asia. It is also a major corn, wheat and soybean exporter.