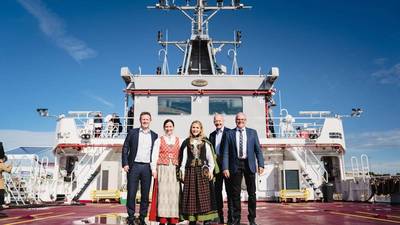 The groundbreaking vessels, which were designed by Norwegian firm Naval Dynamics and built at Cochin Shipyard in India, are equipped with technology from Kongsberg Maritime enabling completely unmanned voyages.

The vessels will be operated by Kongsberg-Wilhelmsen joint venture Massterly and will initially sail with a limited crew of around four people, including captains. Then, after a two-year trial period, the plan is to transition to sailings without people on board. The vessels will be monitored from shore in Horten.

According to ASKO, the main drivers for commissioning these new vessels are reduced transport costs and emissions. Marit and Therese will replace one million road kilometers of truck transport a year (which corresponds to approximately 16,600 driver hours annually) and contribute to 5,000 tonnes less CO₂ emissions per year, the company said

Each 67-meter-long vessel is able to transport 16 fully loaded standard EU trailers at a time, loaded via a ramp at the stern and stowed on the open deck. The vessels feature SCHOTTEL EcoPellers and PumpJets.

Kai Just Olsen, director of ASKO MARITIME, said, "This is a very special day. Christening is only the beginning of a long journey. We are paving the way for new projects to come."

MS Marit and MS Therese are named after cross country ski champions Marit Bjørgen and Therese Johaug, who served as the vessels' godmothers during last week's christening ceremony in the Port of Moss, Norway.

ENOVA has supported the project – including the required port infrastructure – with 119 million NOK, in line with Norway's commitment to slash emissions and shift transport from road to sea when possible.