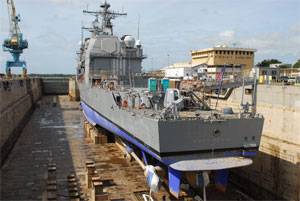 The Navy has completed a majority of its damage assessment of USS Port Royal (CG 73), which ran aground a half-mile off Honolulu Airport's Reef Runway Feb. 5.

The propeller blades, sonar dome and underwater hull were among items damaged on the 567 ft guided-missile cruiser. Critical systems -- such as the vertical launch cell hatches and other weapons systems, the AEGIS radar system, ballistic missile defense capability, surface-search radar, anchors, antennae and gas-turbine engines -- were not damaged.

Although it will be several weeks before the complete and detailed damage assessment is done, repair estimates range from $25 to $40m. Actual cost will depend on what the damage assessment reveals as well as public shipyard and private shipyard labor and material costs. Costs identified in the preliminary estimate include repairing or replacing the ship's sonar dome and transducers (if required), refurbishment of the two propulsion shafts, which still have to be removed, rotated and fully inspected, and re-painting of the underwater hull. The length of the repair period will be determined upon completion of the damage assessment.

"We still need to do a final structural analysis of the sonar dome, determine the number of transducers that require replacement and complete the assessment of the propulsion train to establish if there is any misalignment," said Capt. Rick Tate of Pearl Harbor Naval Shipyard and Intermediate Maintenance Facility's Industrial Management Department.

The grounded Port Royal was refloated early Feb. 9 and towed to Pearl Harbor where it entered dry dock Feb. 18.