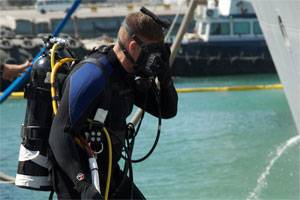 The U.S. Navy submarine and U.S. amphibious ship that
collided in the Strait of Hormuz March 20, have been undergoing extensive engineering and damage assessments since pulling into Bahrain March 21.

While overall damage to both ships is being evaluated, investigators believe Hartford rolled approximately 85 degrees during the collision.

Despite the roll, engineering investigations have confirmed the propulsion plant of the submarine was unaffected by this collision.

However, Hartford sustained damage to its sail and periscope, as well as the port bow plane.

New Orleans suffered a ruptured fuel tank. Divers have determined the resulting hole is approximately 16 by 18 feet in size. There was also interior damage to two ballast tanks.

The Safety Investigation Board is appointed to identify hazards and their causal factors in serious incidents. Their report is an essential tool to identify causes to prevent recurrence.

The JAGMAN investigation is intended to provide a critical and objective overview of what happened. Kleint, a nuclear-trained surface warfare officer, is joined by a post-command submarine officer. They are supported by a three-person legal team.

Both investigations have a 30-day initial timeline, but extensions may be granted if more time is needed to complete the investigation process.

Hartford and New Orleans were on regularly scheduled deployments to the U.S. 5th Fleet Area of Operations conducting maritime security operations (MSO) when the accident occurred.