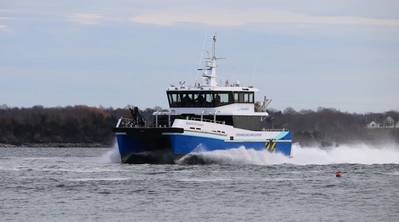 The 64.9-foot wind farm support vessel will be based out of Virginia’s Hampton Roads region under AWT's long-term O&M CTV contract with Dominion Energy for CVOW project support. Manned by a crew of two or three, Atlantic Endeavor has capacity to transport up to 24 wind farm technicians.

The vessel is equipped with MAN engines, Cummins generators, ZF Transmissions, HamiltonJet waterjets and Humphree USA Interceptors. Its service speed is 22-24 knots, with a sprint speed of 29 knots.

On deck, the CTV has 10 metric tonnes cargo capacity, and it is fitted with a Palfinger crane and Nabrico anchor winch.

AWT, based in Quonset Point, R.I., is the Unite States' first CTV owner/operator. Its first CTV, Atlantic Pioneer, was built in 2016 and has been servicing the five 6-megawatt turbines at the Block Island Wind Farm off Block Island, R.I.