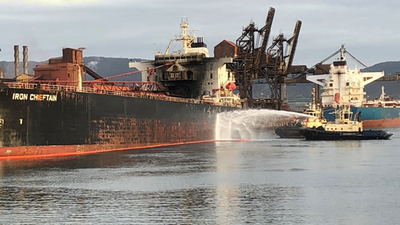 Australia's national transport safety investigator is calling out inadequate international vessel fire safety standards and regulations in the wake of a 2018 bulk carrier fire that took five days to contain and extinguish.

The 202 meter, Australian flagged self-unloading bulk carrier Iron Chieftain was discharging its cargo of dolomite at Port Kembla, New South Wales in the early hours of June 18, 2018 when friction, probably from a failed bearing, generated enough heat to ignite a rubber conveyor belt in the C-Loop internal cargo handling space. (Self-unloading bulk carriers are equipped with a series of conveyor belt systems and spaces that enable cargo to be unloaded without requiring shore-based equipment.)

During a regular safety round of the self-unloading system during cargo discharge operations, a crew member detected a strange smell and white smoke that abruptly changed to black as the crew member approached the deck casing door for the C-loop space.

The ship’s crew then initiated an emergency response but shipboard efforts to control the fire proved ineffective, with the fire soon establishing itself and spreading to the exterior of the ship, setting the discharge boom alight. The ship’s crew were eventually evacuated and Fire and Rescue New South Wales (FRNSW) firefighters took charge of the response to the fire. The fire was contained and eventually extinguished about five days later.

The fire caused substantial structural damage including breaches of two fuel oil tanks, and much of the self-unloading system was destroyed. The ship was subsequently deemed uneconomic to repair and declared a constructive total loss before it was towed to Turkey for recycling. However, there were no serious injuries or marine pollution reported as a result of the fire.

“The fire on board Iron Chieftain demonstrates how the effectiveness of a shipboard response to a fire depends primarily on the ability to detect the fire at an early stage and quickly extinguish it at the source,” said ATSB Chief Commissioner Greg Hood.

“Iron Chieftain’s self-unloading system was not equipped with a fire detection or fixed fire-extinguishing system in the C-Loop space, but nor was it required to be.

The ATSB’s investigation report also notes that the initial emergency response by the crew, in particular stopping the conveyor belts, aided the fire’s early development as heat could not dissipate.

“Following ignition, the combination of high fuel loads in the form of rubber conveyor belts in the C-Loop space and airflow from the vertical design of the loop and its ventilation fans, meant the fire quickly established itself and travelled along the C-Loop’s rubber conveyor belt system to the ship’s exterior to the deck discharge boom and set it alight,” said Hood.

In addition, heat from the fire in the C-Loop space caused thermal stress, cracking and deformation to the adjacent heavy fuel oil tanks, releasing additional fuel for the fire and increasing its intensity and complexity.

“The absence of these measures has been a contributing factor in at least three major shipboard fires over a 25‑year period, including Iron Chieftain.”

Hood said the ATSB welcomes the commitment by the Australian Maritime Safety Authority (AMSA) and Lloyd’s Register to approach the International Maritime Organization (IMO) and the International Association of Classification Societies (IACS) respectively, to highlight the safety issue regarding the inadequacy of fire safety standards or regulations for self-unloading system spaces.

“Nonetheless, the ATSB is recommending that AMSA formally raise the safety issue with the IMO to initiate safety action aimed at addressing the risk of fire in the cargo handling spaces of self-unloading bulk carriers due to the inadequacy of the current associated standards and regulations,” he said.

Separately, the investigation notes that while the operators of Iron Chieftain had identified the fire risk in the ship’s cargo handling space due to the lack of fire detection and fixed extinguishing systems, particularly in the C-Loop space, about five years earlier, the prevention and recovery measures it put in place were not sufficient to mitigate the risk.

In response to the Iron Chieftain fire, the operator’s parent company, the CSL Group, initiated a fire risk mitigation project across its global fleet of self-unloading bulk carriers to improve fire detection and suppression technology, reviewing its firefighting policy and setting minimum fire safety standards for early fire detection and suppression at the ship design and build stage.