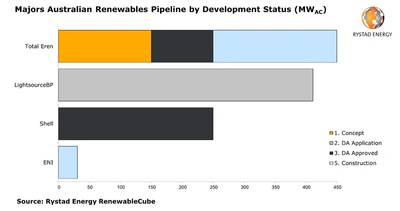 The Australian renewable energy pipeline is surging above 100GW of solar, wind and utility storage projects. Investment is currently matching upstream capex, at US$10 bn per annum.

Only 1GW is currently owned by Upstream companies – the majors, said Rystad Energy, the energy research and business intelligence company.

By the end of the decade, upstream companies will be the dominant renewable developers in country and regionally. The driver will be economics as much as an increasing desire to ride the solar-coaster.

Woodside and Santos are absent from the chart (for now) but both are making strides in the sector. Woodside is focusing on battery storage replacing spinning reserves and more recently in hydrogen (or solar exports as dubbed in Australia!).

The facility is grid-connected and uses electricity within its operations – the solar farm reduces both exposure to electricity prices and Scope 2 (indirect energy) emissions.