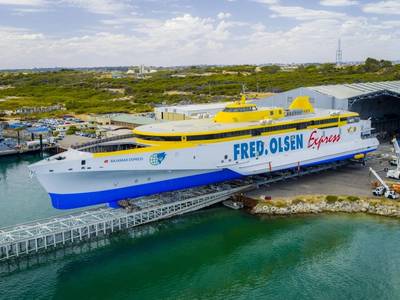 The ferry is now in the final stages of fit-out. She is scheduled for delivery in spring 2020, said a press note from the shipbuilder.

Bajamar Express is a 118-meter aluminium trimaran, capable of transporting more than 1,100 passengers and 276 cars at speeds of up to 38 knots. Its sister ship, Bañaderos Express, is under construction at Austal Philippines.

The vessel will operate on Fred. Olsen Express’ Santa Cruz, Teneriffe and Agaete, Las Palmas routes in the Canary Islands.