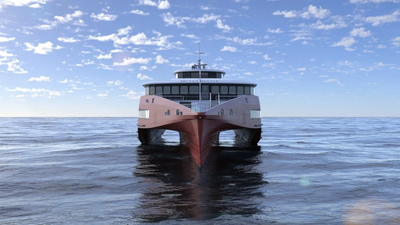 Austal has revealed its latest development in high-speed trimaran technology with an 83 meter trimaran ferry.

The ferry is under construction for JR Kyushu Jet Ferry of Japan, at the company’s Henderson South shipyard in Western Australia.

Austal Hull 396, to be known as Queen Beetle, was designed and constructed by Austal Australia and is due for launch in mid-March 2020. The vessel will be handed over to JR Kyushu Jet Ferry in June 2020 and will commence services between Busan, South Korea and Fukuoka, Japan in July 2020.

Speaking at the reveal ceremony, which was attended by more than 100 guests, including Governor of Western Australia The Hon Kim Beazley AC and West Australian Premier The Hon Mark McGowan MLA, Austal Chief Executive David Singleton said the company was proud to be introducing the new trimaran to Japan while offering outstanding value to a new customer, JR Kyushu Jet Ferry.

“We’re very proud to be introducing this new Austal trimaran to one of the most technologically advanced and mature markets in the world. In fact, Queen Beetle will be the first high-speed trimaran ferry to be delivered to and operate in Japan.

“This new ship will truly transform the fast-ferry journey between Japan and South Korea, offering significantly improved seakeeping and an exceptional on-board experience for passengers and crew.

“With a capacity to carry 502 passengers in greater comfort, with previously unavailable amenities such as a shop and café, this new trimaran represents outstanding value to our customer, JR Kyushu Jet Ferry,” he said. 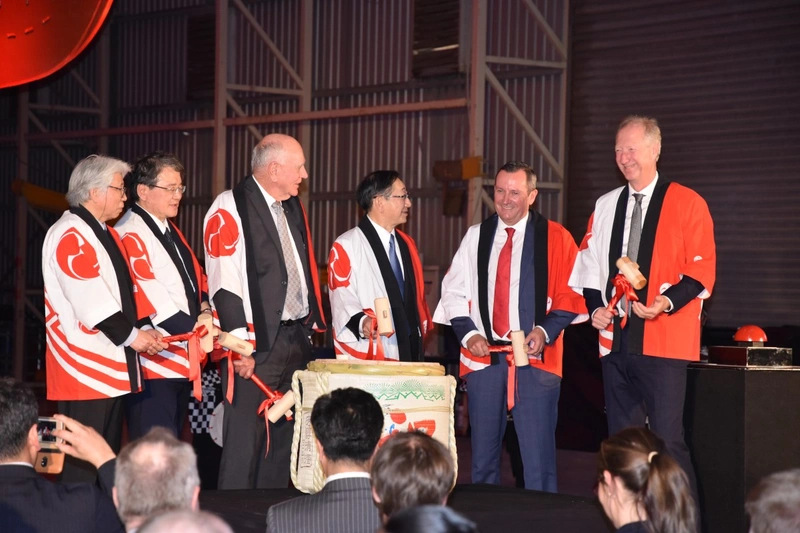 Since 2005, Austal has delivered 14 high-speed aluminium trimarans worldwide, including 11 for the United States Navy. Austal has a further 11 trimarans under construction or scheduled for construction at the company’s shipyards around the world - and remains the only shipbuilder designing, constructing and sustaining large high speed trimaran ferries, globally.

More than 200 West Australians were employed in the design and construction of the vessel, spending a combined 450,000 hours to get the vessel to the current point in its construction program.

The distinctively red-painted Queen Beetle will be able to transport 502 passengers (and 20 crew) across 2 passenger decks, at speeds up to 37 knots on the 115 nautical mile route.

Featuring a customized interior designed by Eiji Mitooka of Don Design Associates, the Queen Beetle includes two classes of seating plus compartments for groups and families, a children’s play area and nursing room, a café and bar, duty-free shop, lockers for luggage and all-access spaces for wheelchairs and prams. An outdoor viewing deck will further enhance the on-board experience for passengers. 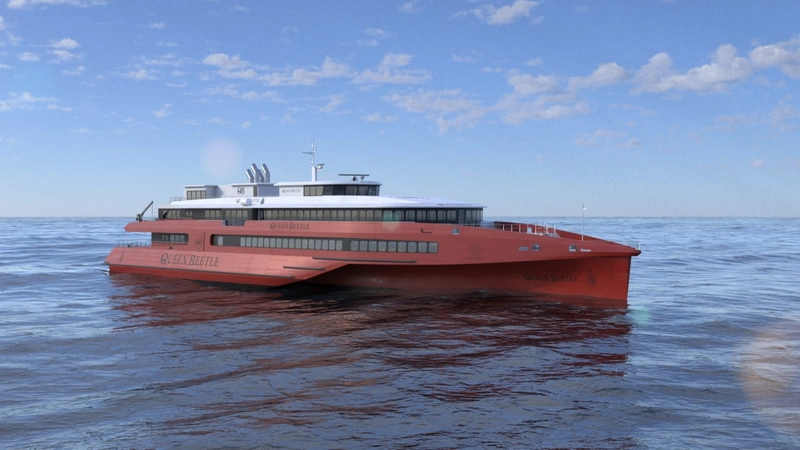