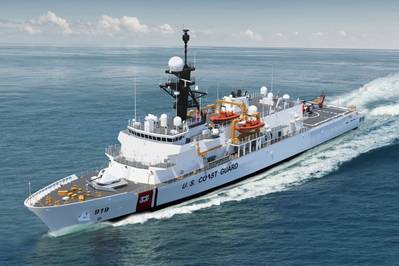 Mobile, Ala. shipbuilder Austal USA has been cleared to begin the second stage of the U.S. Coast Guard's (USCG) Heritage-class offshore patrol cutter (OPC) build program following the withdrawal of an award protest filed by an unsuccessful bidder, the USCG said on Thursday.

In June, Austal USA was awarded a $208.26 million contract for detail design and long lead-time material for one OPC, with options for production of up to 10 additional vessels. The deal could be worth up to $3.33 billion if all options are exercised.

Shortly after in July, Eastern Shipbuilding Group, based in Panama City, Fla., under contract to build the first four OPCs for stage one of the program, filed a protest with the Government Accountability Office (GAO), citing unfair competitive advantage and conflict. The group claims Austal had access to non-public OPC information that gave it an advantage toward securing the highly-contested shipbuilding project.

Austal USA, which recently opened a new $100 million facility that gives it steel shipbuilding capabilities, is expected to start OPC construction in 2023. The first Austal-built OPC will be named Pickering.

The Coast Guard intends to commission up to 25 Heritage-class cutters over the next two decades to replace the service's 270-foot and 210-foot medium endurance cutters. The new 360-foot OPCs will be used for missions such as law enforcement, drug and migrant interdiction and search and rescue operations. Each will have a range of 10,200 nautical miles at 14 knots and a 60-day endurance period.