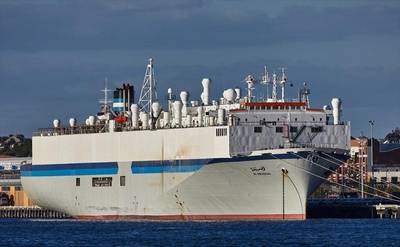 Australian officials were evacuating workers from a Kuwaiti-flagged livestock ship docked off the country’s west coast on Tuesday after at least half the 52 crew tested positive for COVID-19.

The cluster of cases is the fourth outbreak detected onboard a ship arriving at a Western Australia port over the last month, in a state that has otherwise been free of the coronavirus for weeks.

“It is becoming clear that ships arriving with COVID-19 on board is one of the weakest links and the biggest risk to our way of life in Western Australia,” state Premier Mark McGowan told reporters in Perth.

The workers, from various countries, were taken from the Al Messilah ship directly into hotel quarantine, leaving just a skeleton staff on board the ship, officials said.

The ship, which belongs to Kuwaiti livestock exporter Al Mawashi, arrived in Perth last week, carrying a crew aged between 20 and 62. The state government did not provide details of its previous travel. Al Mawashi and parent company Kuwait Livestock Transport and Trading did not immediately respond to requests from Reuters for comment.

The West Australian government said 24 of the crew had tested positive since the ship arrived in Australia last week. The remainder have been tested and are awaiting results. Two Australian crew members left the ship before the outbreak was detected, but had since tested negative, officials said.

As an export dependent state, it would be costly for officials to shut Western Australia’s borders despite the outbreaks on vessels arriving to pick up supplies of commodities such as iron ore and wheat.

Case numbers were down from four on Monday, extending a run of single-digit daily increases to almost a week, and are well down from a peak of more than 700 cases in a single day in early August.

Andrews said it was not immediately clear if the case reported on Monday was still an active infection, saying the person had tested positive earlier and may be shedding the virus.

“This could potentially be a day of zero and it’s been a long time since we had a day of zero,” said Andrews.

Melbourne’s roughly 5 million residents were granted some more freedom to move about on Monday after a months-long lockdown, with time limits on exercising outdoors removed and allowed travel limits extended to 25 kilometers (15 miles) of their homes.

However, public gatherings remain tightly limited and retailers and restaurants must operate only on take-away or delivery orders, with Nov. 1 set for the next major step to lift restrictions.

“I think we’re well placed to reach the point on the weekend where we can talk more and possibly bring forward some of those changes,” said Andrews.

Australia has recorded just over 27,300 COVID-19 infections far fewer than many other developed countries. Victoria accounts for more than 90% of the 905 deaths nationally.