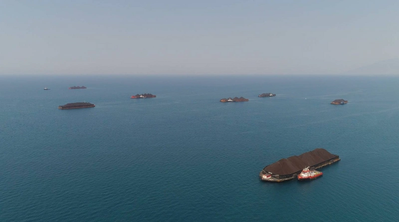 Indonesia and Australia, among the world's top coal exporters, have hit their production limits and are unlikely to meet Europe's demand for additional supplies if the European Union bans Russian coal imports, mining executives said on Wednesday.

The European Commission proposed on Tuesday new sanctions against Russia over its invasion of Ukraine, including a ban on buying Russian coal and on Russian ships entering EU ports, and said it was working on banning oil imports too.

The EU depends on Russia for around 45% of its coal imports, according to the European Commission website.

Before the EU proposal, some European buyers had already held talks with Indonesian miners in March as they sought to replace Russian supplies, a senior executive of Indonesia Coal Miners Association (ICMA) said.

The country also has tightened supervision over its mandatory domestic sales after stocks fell to a critical low at local power generators.

In addition, European markets require mostly middle- to- high-grade coal while most Indonesian miners produce lower-grade coal, Hendra Sinadia, executive director of ICMA said. Freight costs for Indonesian coal to Europe are also not competitive versus other suppliers, he added.

The few miners who might have the space to expand their output will require government approval for additional production and exports, Hendra said. Such requests are typically submitted in April-June.

Indonesia's monthly coal benchmark price COAL-HBA-ID has already surged to a record $288.40 per tonne for April due to high global demand.

Australia
In Australia, producers have fielded calls from buyers reliant on Russian coal and have been approached by the government to help coal buyers in allied countries, such as Poland, to replace Russian supply.

While benefiting from soaring prices for metallurgical coal used in steel mills as well as thermal coal used in power generation, Australian miners are unable to boost output quickly, and most of their volumes are tied up in contracts to existing customers.

Australian output has been hit by floods in New South Wales and Queensland, COVID-19 outbreaks and labour shortages, holding output below full capacity.

Total thermal coal exports for the year to June 2022 are expected to rise about 7% from a year earlier, when output was hit by China's unofficial ban on Australian coal, to 206 million tonnes, then slip to 204 million tonnes in 2023, the government said in a quarterly report on Monday.

Miners were also unable to expand production in the near term as they face tough regulatory hurdles for new mines, community and farmer opposition to building new mines, as well as capital constraints.

(Reuters - Reporting by Fransiska Nangoy in Jakarta and Sonali Paul in Melbourne; Editing by Florence Tan and Kim Coghill)