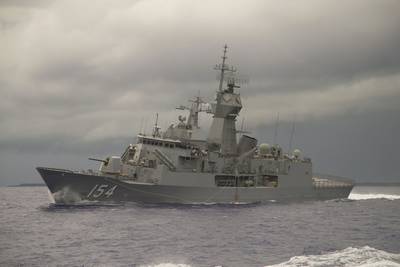 An Australian frigate has joined three U.S. warships in the South China Sea near an area where a Chinese vessel is suspected to be exploring for oil, near waters also claimed by Vietnam and Malaysia, officials said on Wednesday.

The warships arrived this week close to where the Chinese government survey ship Haiyang Dizhi 8 has been operating, which is in turn near where a vessel operated by Malaysia’s Petronas state oil company is conducting exploratory drilling, regional security sources have said.

The U.S. navy said on Tuesday the USS America amphibious assault ship and the USS Bunker Hill, a guided missile cruiser, were operating in the South China Sea.

They were joined by Australia's frigate HMAS Parramatta and a third U.S. vessel, the destroyer USS Barry, as part of a joint exercise, the Australian defense department said.

"During the passage exercises, the ships honed interoperability between Australian and US navies, including replenishment-at-sea, aviation operations, maritime maneuvers and communications drills," it said in a statement to Reuters.

The Haiyang Dizhi 8 was 325 km (202 miles) off the Malaysian coast, within its exclusive economic zone, data from ship-tracking website Marine Traffic showed on Wednesday.

The ship, accompanied by a Chinese coastguard vessel, has been moving in a hash-shaped pattern consistent with a seismic survey for nearly a week, the data showed.

The area is near waters claimed by both Vietnam and Malaysia as well as China.

China claims most of the energy-rich South China Sea, within a U-shaped "nine-dash line" on its maps, which is not recognized by its neighbors.

Petronas and Malaysia's foreign ministry have not commented on the situation but the United States has called on China to stop its "bullying behavior" in the South China Sea.

China, however, has denied reports of a standoff, saying the Haiyang Dizhi 8 was conducting normal activities.

It appeared off Vietnam again last week, within Vietnam's exclusive economic zone. Vietnam said it was closely monitoring the situation.

The United States has accused China of pushing its presence in the South China Sea while other claimants are pre-occupied with the coronavirus.

At the same time, China has been donating medical aid to Southeast Asian countries to help them tackle the virus, which emerged in central China late last year.

A team of Chinese medical experts arrived this week in Malaysia, which has reported more than 5,400 coronavirus infections.

On Sunday, Vietnam protested after China said it had established two administrative districts on the Paracel and Spratly islands in the disputed waters. China has called Vietnam's claims illegal.