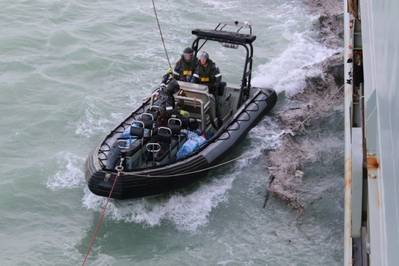 More than 400 stranded guests and staff have been rescued from Daydream Island off Queensland, ravaged by Tropical Cyclone Debbie, thanks to the actions of HMAS Melville.

The hydrographic ship was operating near Townsville when the cyclone hit the Whitsunday Islands, and followed the tail end of the system through rough seas as Debbie headed south.
Melville’s Commanding Officer, Commander Neil Cheverton said his crew had worked with local authorities to coordinate ferry access to Thursday Island, to evacuate the resort.
“After conducting a quick assessment of the harbour and wharf with our small boat, we were able to land a shore party to assist with the planning and evacuation,” Commander Cheverton said.
“Our small boat guided the local ferries in and out of the harbour which was littered with debris.”
To add to the drama, a heavily pregnant woman fainted during the evacuation and Melville coordinated her rescue by Chinook helicopter.
“I am extremely proud of the way my team worked with the local authorities, in horrendous conditions, to help our fellow Australians,” Commander Cheverton said.
HMAS Melville continues to operate in the area to support the whole of Australian government relief effort, and had conducted searches of surrounding areas to confirm there are no others stranded.
HMAS Choules is scheduled to arrive in the area shortly, and will provide more equipment and supplies to supplement the work started by HMAS Melville.