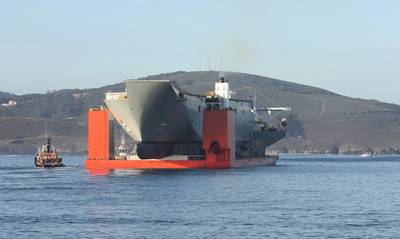 “The Canberra-Class LHDs are the largest ships ever built for the Navy and will provide the Australian Defence Force with one of the most capable and sophisticated amphibious deployment capabilities in the world,” Defence Minister Senator David Johnston said.

Senator Johnston said each ship can carry a combined arms battle group of more than 1100 personnel, 100 armoured vehicles and 12 helicopters and features a 40-bed hospital.

“The departure of LHD02 (to be named as HMAS Adelaide) from Vigo en route for Australia marks another major milestone for the Defence Materiel Organisation (DMO), Royal Australian Navy (RAN) and the prime contractor BAE Systems.

“On arrival in Australian waters the ship will transit to Melbourne and then on to the Williamstown dockyard for consolidation of the superstructure and installation of the combat, communications and navigation systems by local ship builders BAE Systems," Senator Johnston added.