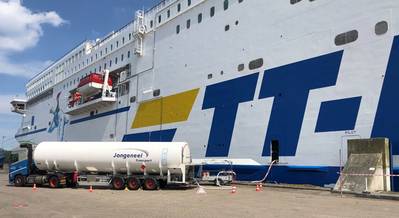 Avenir LNG announced its wholly owned subsidiary Avenir Marine has organized the first LNG and BioLNG delivery in the Port of Lübeck, Germany. On June 10, the chilled fuel was bunkered into TT-Line’s new RoPax ferry Nils Holgersson at the Scandinavian quay of the Baltic Sea port.

To execute the operation Avenir teamed up with LIQUIND 24/7 GmbH, a leading German LNG infrastructure provider, and Landwärme GmbH, one of Europe’s leading biomethane traders. The fuel delivered to the vessel was 10% BioLNG .

The operation is the start of a long-term cooperation between Avenir LNG and TT-Line for the supply of LNG and BioLNG to 2 new RoPax ferries that will transport passengers and cargo between Baltic Sea ports in Sweden, Germany, and Poland. In doing so, the environment and population in the region are immediately benefitting from the environmental advantages of transitioning these vessels to LNG.

Commenting on the deal, Peter Mackey, CEO of Avenir LNG Limited, said, “We are excited about this successful first delivery of LNG to TT-Line in Lübeck. The fact that 10% of the delivery was Bio-LNG underlines the commitment of all parties involved to reduce emissions and increase the sustainability of shipping even further through the development of a suitable small-scale LNG infrastructure. Avenir is committed to the deployment of bunker vessels and the construction of new terminals, to improve the availability of environmentally friendly fuels for our customers across the marine, industry, and logistics segments.”

According to Christian Schneider, Managing Director of LIQUIND 24/7, “The effective execution of this bunkering operation shows the importance of cooperation between different small-scale LNG frontrunners for the successful development of LNG supply chains for those companies that are taking the decision to reduce their environmental footprint. Furthermore, the operation shows the logistical and technical capabilities, as well as the thrive to provide BioLNG, LIQUIND 24/7 has developed in the past years as a leading alternative fuel infrastructure provider in the German market.”

Landwärme’s CEO Zoltan Elek added, “Despite existing regulatory barriers BioLNG is the most viable solution today in order to quickly reduce emissions i.e. in maritime transport and guarantee energy security, as well as independence on a path to carbon neutrality.”