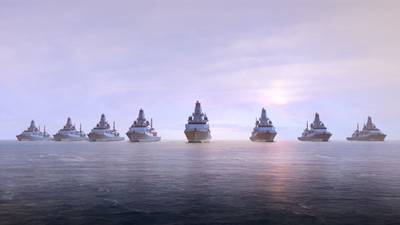 Multinational defense contractor and shipbuilder BAE Systems announced it has been awarded a £4.2 billion (approx. $5 billion) contract from the U.K. Ministry of Defense to build the next five City Class Type 26 frigates for the U.K. Royal Navy in Glasgow.

Ships of the class will be advanced warships designed for anti-submarine warfare and high-intensity air defense, but can adapt its role quickly to transport high volumes of humanitarian aid and house medical facilities, according to the shipbuilder.

The British government has planned to order eight Type 26 frigates since cutting the program from 13 ships in 2015.

Three Type 26 ships are already in build in Glasgow, with the first of class, HMS Glasgow, on track to enter the water later this year and be delivered to the Royal Navy in the mid-2020s, said BAE, which is also presently building HMS Cardiff and HMS Belfast.

"We are investing in our fleet to ensure our Royal Navy maintains its world-leading capability to protect and defend our nation at sea. This design has already been successfully exported to Australia and Canada, proving itself as a world-class maritime capability, securing thousands of U.K. jobs and strengthening alliances with our allies," said Ben Wallace, U.K. Secretary of State for Defense. "Supporting thousands of high-skilled jobs in Scotland, and more across the wider U.K. supply chain, this contract will continue to boost our British shipbuilding industry, galvanizing the very best of British engineering, manufacturing and design."

Charles Woodburn, chief executive, BAE Systems, said, "This contract secures a critical U.K. industry and allows us to build on our long history of shipbuilding on the Clyde as we continue to deliver cutting-edge equipment to the Royal Navy into the next decade."