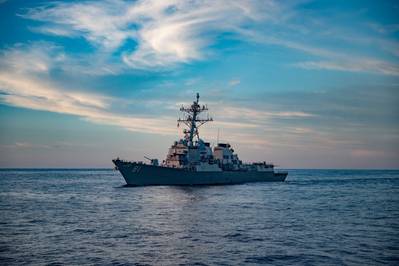 BAE Systems received a $83.5 million contract from the U.S. Navy to modernize the guided-missile destroyers USS Carney (DDG 64) and USS Winston S Churchill (DDG 81). The modernization work will be performed sequentially by the company’s shipyard in Jacksonville, Fla. The contract include options that, if exercised, would bring the cumulative value to $211.6 million.

The USS Carney will be first in the shipyard, arriving in September 2020. The 23-year-old ship just returned from a six year operational period in Rota, Spain and will undergo extensive repair and upgrade work that will take more than 400 days to complete. The shipyard will drydock the ship and perform maintenance of the underwater hull, renovation of crew habitability spaces and upgrades to shipboard systems. The modernization is scheduled to be completed in November 2021.

The Winston S. Churchill will undergo a 390-day maintenance period when the ship arrives in June 2021. The shipyard’s work aboard the 18-year-old ship will include drydocking, replacement of steel structures onboard and support of the electronic systems upgrades. The modernization of the Winston S. Churchill is scheduled to be completed in July 2022.

BAE Systems’ Jacksonville shipyard has posted jobs for and is expecting to hire workers in a number of trades, including welders, pipefitters, electricians, and painters, over the next two years to work on the two destroyers and for its ongoing repair and modernization work on other ships. The award of these two ships will also provide work for our team of subcontractor partners and third party vendors in the port.