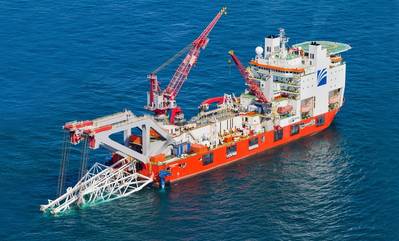 A subsea and offshore contractor affiliate of Ezra Holdings Ltd, a struggling Singaporean oilfield services firm, filed for U.S. bankruptcy as it ran short of cash due to a lingering downturn in the oil-and-gas industry.
The affiliate, Emas Chiyoda Subsea Ltd, said in court papers filed in Houston that the company was suffering from weak demand for its subsea contracting work and tightening credit conditions.
Ezra has said it may have to take a $170 million writedown on the value of its investment in Emas Chiyoda.
Oilfield service firms have been turning to bankruptcy to shed debt and raise cash after years of hunkering down after energy prices tumbled from the recent peak in 2014.
Emas Chiyoda's bankruptcy comes eight months after it teamed up with India's Larsen & Toubro Ltd to land a $1.6 billion contract with Saudi Aramco, Saudi Arabia's state-owned oil company, to expand the offshore Hasbah gas field.
Onshore work has begun and the offshore phase of the Hasbah project will begin later this year, said Emas Chiyoda's general counsel, Stephen McGuire, in a court filing.
The company, which is based in Birmingham, United Kingdom, said it had about $550 million in debt.
"As a result of the deteriorating market conditions in the oil and gas sector coupled with the company's financial difficulties, the company's lenders have frozen borrowing availability," McGuire said in a court filing.
The company has requested court permission to borrow up to $90 million to allow it continue its current projects with minimal disruption. The company will seek access to $55 million of the proposed loan at a hearing on Wednesday in Houston.
The proposed loan is being extended by Chiyoda Corp of Japan and Subsea 7 S.A. of the United Kingdom, according to court documents.
The loan requires Emas Chiyoda to file a bankruptcy exit plan in 60 days and to have the plan confirmed by U.S. Bankruptcy Judge Marvin Isgur, who was assigned to the case, in 120 days.
Ezra of Singapore owns 40 percent of Emas Chiyoda, Chiyoda owns 35 percent and Nippon Yusen KK of Japan owns the remainder, according to court documents.
A creditor of a subsidiary of Emas Chiyoda filed a court petition this month to liquidate the unit.