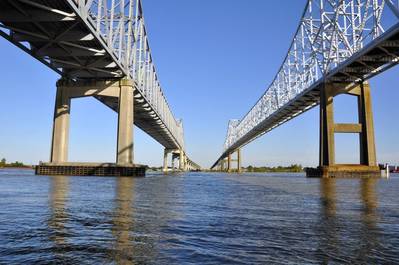 Responders are searching by air and sea to locate a barge crew member who went missing Tuesday near mile marker 105 in the Lower Mississippi River, the Coast Guard said.

The Coast Guard said its watchstanders in New Orleans were notified around 3 p.m. Tuesday that one of Zito Fleeting's barge workers had fallen overboard near Jefferson Heights in Jefferson Parish, La. Missing is 44-yeard-old Elisander Alvardo, last seen wearing coveralls and no life jacket.

The Coast Guard issued an Urgent Marine Information Broadcast and directed the launch of search and rescue assets to search for the overboard mariner.

Involved in the search are a Coast Guard 29-Foot Response Boat-Small II boatcrew and MH-65 Dolphin helicopter aircrew from New Orleans, as well as a marine unit and helicopter crew from Jefferson Parish Sheriff's Office.

The search is ongoing as of Wedneday afternoon, a Coast Guard spokesperson told MarineLink.