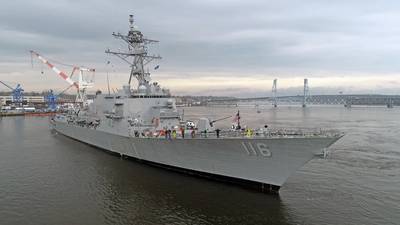 The future USS Thomas Hudner (DDG 116) returns after successfully completing acceptance trials. The Arleigh Burke-class destroyer spent a day underway off the coast of Maine testing many of its onboard systems to validate that their performance met or exceeded Navy specifications. (U.S. Navy photo courtesy of Bath Iron Works/Released)

“Bath Iron Works is privileged to continue producing state-of-the-art surface combatants for the longest running naval shipbuilding program in our nation’s history,” said Dirk Lesko, President of Bath Iron Works. “This award demonstrates the vital role the DDG 51 plays in the security posture of the United States and the confidence the Navy has in our shipyard to produce these important assets.”