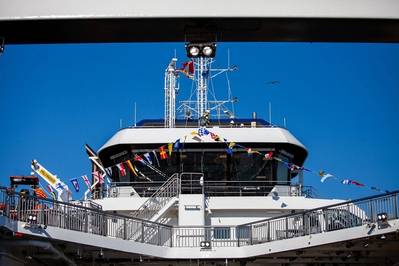 On February 19, BC Ferries held a naming ceremony for the first of its two Island Class Ferries at Victoria’s Point Hope Maritime.

At the event, the names of the vessels – Island Discovery and Island Aurora – were revealed for the first time. The two ferries, based on Damen’s 81-meter Road Ferry 8117E3 design and built at Damen Shipyards Galati in Romania, will enter service mid-2020, serving the Powell River-Texada Island and Port McNeill-Albert Bay-Sointula routes respectively.

The vessels sponsors were selected from the BC Ferries family  and the local communities. The sponsors of the Island Discovery were Sandy Leduc and Sandy McCormick, while the Island Aurora was sponsored by Melissa Fletcher and Sheila O’Neill.

Damen signed the contract for the two vessels in 2017, following an extensive, multi-phased international tender process. The vessels are designed to carry 47 vehicles and up to 450 passengers and crew. The Island Class are battery equipped for full electric operation in the future. In the meantime, the ferries are equipped with hybrid equipment. Damen has paid close attention, in the design of the vessels, to reducing both emissions and underwater radiated noise.

Island Discovery and Island Aurora are part of BC Ferries fleet renewal program and will replace the 59-year old North Island Princess and 53-year old Quadra Queen II. In November, Damen announced that it had secured a repeat order from BC Ferries for four additional Island Class Ferries. 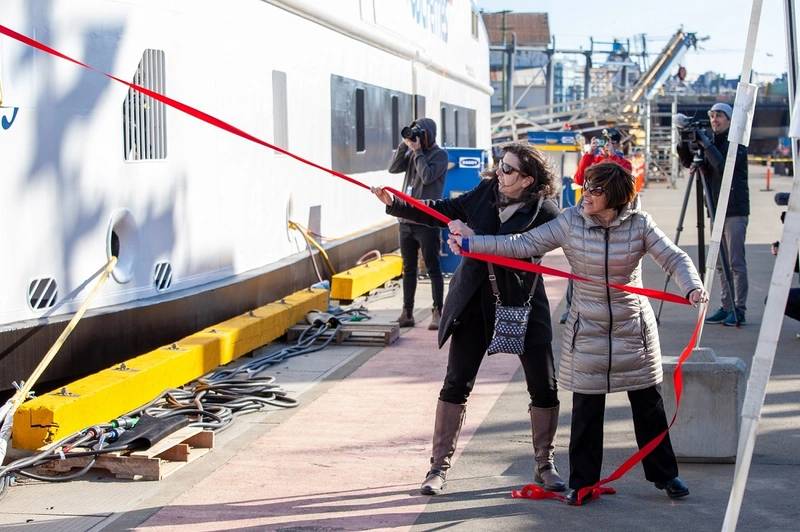 Left to right: Co-sponsors Sandy Leduc (BC Ferries) and Sandy McCormick (Texada Island) pulling a ribbon that smashes a bottle of champagne against the hull of Island Discovery to christen the vessel. (Photo: Damen)