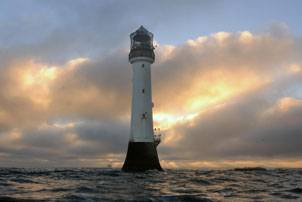 Eleven miles off the coast of Arbroath in Scotland, the Bell Rock Lighthouse, standing on the Inchcape Reef, has withstood two centuries of vicious storms and powerful North Sea surges to safely guide ships away from the dangers beneath. The Feb. 1 marked the 200th anniversary of the lighting of the beacon and sponsored by Inchcape Shipping Services, the anniversary will be celebrated with a series of events in Edinburgh, Arbroath and beyond.

HRH The Princess Royal, patron of the Northern Lighthouse Board, will be in Edinburgh to hold a reception at Holyrood House on the evening of Thursday February 3, and to open a conference on “The Bell Rock Lighthouse, the Stevensons, and Emerging Issues in Aids to Navigation” being held at the Royal Society of Edinburgh, on Friday 4th.

“We are delighted to be sponsoring these events marking such a remarkable engineering feat, said Capt. Claus Hyldager, CEO of Inchcape Shipping Services. “It clearly meant a great deal to our founder, James Lyle Mackay who, upon the Lighthouse’s Centenary in 1911, took his title from the Inchcape Reef, and to whom we owe our name today.

“We have taken this opportunity to launch the ISS Lighthouse Relay Voyage – a Corporate Social Responsibility initiative inspired by the Bell Rock Lighthouse’s altruistic purpose. As a company with offices in over 60 countries around the world, Inchcape Shipping Services is committed to giving something back to the communities where we do business and this project will see us helping the sick, underprivileged and disadvantaged within those communities.”

The events have been organized by the Royal Society of Edinburgh and the Northern Lighthouse Board.

Lord Wilson of Tillyorn, President of the RSE, said: “The story of the Bell Rock Lighthouse and those who have been a part of its history, from its designer to its keepers, is inspirational. But that story is not over. 200 years on, its light is still shining. Those years have seen huge changes, from the automation of lighthouses to advances in the technologies used in navigation. But these solid beacons will continue to be vital into the future. GPS signals can fail. Lighthouses stand firm as immovable markers of dangers lurking beneath the surface of the ocean”.

These events are part of a wider program of celebrations: Bell Rock 200. The program includes the major exhibition “Shining Lights” at the National Museum of Scotland which runs until April 3, and the “Year of Light” community-based celebrations in Arbroath.