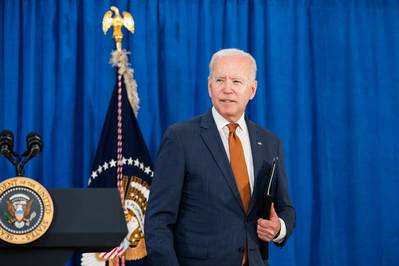 President Joe Biden will soon order U.S. transportation agencies to crack down on anti-competitive conduct and unjust fees in the rail and sea shipping industries to try to lower costs to consumers, the White House said on Thursday.

It said his executive order is aimed at the Federal Maritime Commission (FMC) and the Surface Transportation Board (STB).

White House Press Secretary Jen Psaki noted that shipping costs had risen dramatically during the months of the pandemic.

The order will urge the STB "to allow shippers to more easily challenge inflated rates when there is no competition between two routes."

Biden will urge the FMC "to take all possible steps to protect American exporters from the high costs imposed by the ocean carriers" and to "crack down on unjust and unreasonable fees, including detention and demurrage charges," the White House said.

The Association of American Railroads said on Thursday that "competition remains fierce across freight providers, and any proposal mandating forced switching would put railroads – an environmentally friendly option that invests $25 billion annually in infrastructure – at an untold disadvantage."

Biden's executive order, meant to foster competition throughout the economy, is expected as early as Friday with goals that include making it easier for farmers to repair their own tractors to requiring airlines to refund baggage fees for delayed luggage.

Reuters first reported some plans for the executive order last week and the White House has since rolled out additional proposals.

Transport costs for shipping goods have soared during the COVID-19 pandemic at a time of growing consolidation in transportation markets.

The forthcoming executive order "encourages the independent federal agencies regulating these markets to take steps to promote competition – which will save American businesses money on shipping costs. That, in turn, will lower prices for American consumers," a source told Reuters earlier.