Biden Urges Congress to 'Crack Down' on Shipping 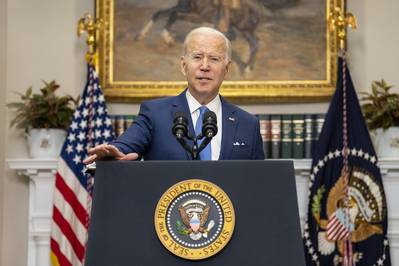 U.S. President Joe Biden on Thursday urged Congress to “crack down” on ocean carriers that have raised shipping prices significantly and helped drive up the cost of goods in the country.

“One of the reasons prices have gone up is because a handful of companies who control the market have raised shipping prices by as much as 1,000%,” Biden said in Twitter post. “It’s outrageous—and I’m calling on Congress to crack down on them.”

“We’ve got to change this. I asked the Congress to pass a piece of legislation to remedy this. Democrats and Republicans voted for it. It’s over in the House of Representatives. I expect it to be voted on fairly shortly, and I expect it to pass. And I’m looking forward to signing it because we’ve got to bring down prices. The underlying elements of our economy are incredibly strong—stronger than any other nation in the world—But inflation is a problem. This won’t solve it all, but it will solve a big piece of it,” Biden said.

In March, the U.S. Senate unanimously passed the Ocean Shipping Reform Act, which would strengthen the investigatory authority of the U.S. agency that oversees ocean shipping and boost transparency of industry practices.

If passed by Congress and signed into law by the President, the legislation would allow the Federal Maritime Commission (FMC) to begin investigations of ocean common carrier’s business practices and apply enforcement measures.

It would also prohibit ocean carriers from unreasonably declining opportunities for U.S. exports that would be determined by the FMC, which would write new rules, and it would require ocean common carriers to report to the FMC each calendar quarter "on total import/export tonnage" making port in the U.S.