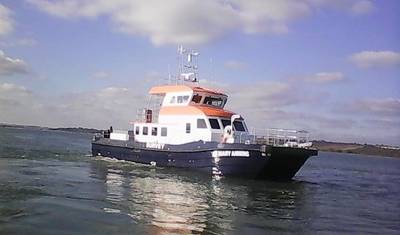 Blyth Catamarans has handed over its largest vessel to date, an 18m survey vessel for the UK’s Swansea University, a project that has been in the making for nearly 14 months.

Among some of the other advanced specs onboard Mary Anning are two trawl winches, a moon pool with multi-beam deployment, dive lift and an external TV to show survey results.

The wheelhouse has a wet lab with TV, survey station, dinette with TV, workshop, bow fender for turbine transfer, raised helm to give 360-degree visibility and observation platform for bird watching.

Following successful sea trials, the vessel has achieved a top speed of 28+ knots and a cruising speed of 18 knots being powered by two MAN V8 1000hp engines with five blade props from Clements Engineering.

In order to cater for building larger vessels in the future, the company recently opened an onsite factory featuring a 9m high building with gantry.