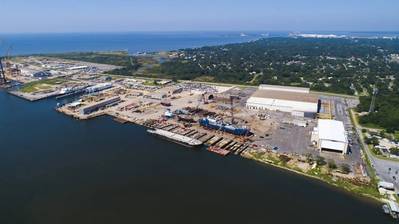 The deal, first announced on November 7, is said to be worth $15 million, according to ST Engineering.

Bollinger, which operates 14 facilities located throughout Louisiana with direct access to the Gulf of Mexico, Mississippi River and the Intracoastal Waterway, is the largest privately-owned and operated shipbuilder in the United States. With the acquisition, it adds 378 acres comprising two shipyards in Pascagoula and two dormant yards north of Pascagoula. The newly acquired yards have been renamed Bollinger Mississippi Shipbuilding and Bollinger Mississippi Repair.

All ongoing programs at VT Halter Marine and STEHMO were conveyed with the transaction, including the Polar Security Cutter (PSC) program for the U.S. Coast Guard and the Auxiliary Personnel Lighter-Small (APL(S)) program for the U.S. Navy. Those programs will continue to be built at Bollinger Mississippi Shipbuilding.

“Today marks an important milestone for Bollinger and our 76-year history,” said Ben Bordelon, Bollinger Shipyards' CEO and president. “We’re excited to offer our defense and commercial customers an expanded suite of high-quality capabilities, services and solutions. By combining our skilled workforces in Louisiana and Mississippi, I know that there’s no better team in the shipbuilding industry to take on the largest, most complex projects.”

For ST Engineering, the divestment comes amid an ongoing portfolio review. The two U.S. marine businesses have incurred a combined net loss before tax of $256 million from 2017 through 2021, with an annual net loss before tax that ranged from about $40 million to $60 million, the company said.

“We have experienced challenges and losses in the past years operating the two U.S. shipbuilding and ship/rig repair businesses. After a thorough review of strategic alternatives, we made this difficult decision to exit the U.S. Marine business,” Vincent Chong, group president and CEO of ST Engineering said when the deal was announced last week.

Chong said he believes the transaction will be favorable for ST Engineering shareholders, Halter Marine and STEHMO as well as their stakeholders.