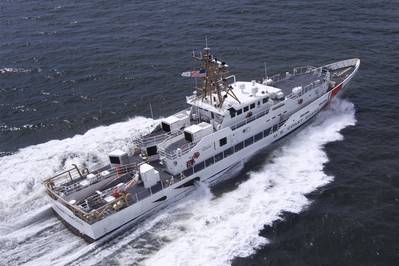 Sister Ship of the JOSEPH NAPIER, MARGARET NORVELL operating in the U.S. Gulf of Mexico.

The announcement was made by Bollinger’s President & C.E.O., Ben Bordelon. “We are very pleased to announce the delivery of the latest FRC built by Bollinger Shipyards, the JOSEPH NAPIER, to the 7th Coast Guard District in Puerto Rico. We are looking forward to honoring and celebrating the heroic acts of Joseph Napier at the vessel’s commissioning.”

The 154 foot patrol craft JOSEPH NAPIER is the 15th vessel in the Coast Guard's Sentinel-class FRC program. To build the FRC, Bollinger used a proven, in-service parent craft design based on the Damen Stan Patrol Boat 4708.  It has a flank speed of 28 knots, state of the art command, control, communications and computer technology, and a stern launch system for the vessel’s 26 foot cutter boat.  The FRC has been described as an operational “game changer,” by senior Coast Guard officials.

The Coast Guard took delivery on October 20, 2015 in Key West, Florida, and is scheduled to commission the vessel in Puerto Rico during January, 2016.

Each FRC is named for an enlisted Coast Guard hero who distinguished him or herself in the line of duty. This vessel is named after Coast Guard Hero Joseph Napier.  Joseph Napier, Keeper of St. Joseph Life-Saving Station 6, showed his true heroism and courage as he risked his life and led his crew into gale-force winds to rescue the men of the wrecked schooner, the D.G. WILLIAMS in October 1877.  Napier demonstrated his courage during multiple rescues as a career lifesaver of the Great Lakes.

Bollinger Shipyards LLC is a designer and builder of fast military patrol boats, ocean-going double hull barges, offshore oil field support vessels, tug boats, rigs, liftboats, inland waterways push boats, barges, and other steel and aluminum products from its new construction shipyards. Bollinger has 10 shipyards and all are strategically located between New Orleans and Houston with direct access to the Gulf of Mexico, Mississippi River and the Intracoastal Waterway. Bollinger is the largest vessel repair company in the Gulf of Mexico region with a total of 29 dry-docks in Louisiana and Texas.

Fairbanks Morse announced it has completed the build and testing of the two main propulsion diesel engines for the U.S. Coast…