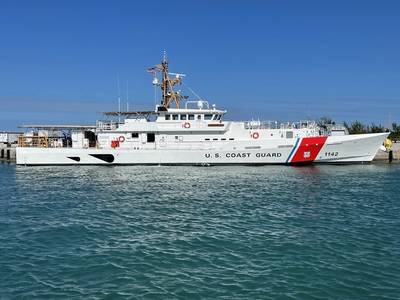 The USCGC Robert Goldman is the second of six FRCs to be home-ported in Manama, Bahrain, which will replace the aging 110-foot Island Class Patrol Boats, built by Bollinger Shipyards 30 years ago, supporting the Patrol Forces Southwest Asia (PATFORSWA), the U.S. Coast Guard’s largest overseas presence outside the U.S.

“Bollinger is proud to continue enhancing and supporting the U.S. Coast Guard’s operational presence and ensuring it remains the preferred partner around the world,” said Bollinger President & C.E.O. Ben Bordelon. “It is our top priority to ensure that the brave men and women of the Coast Guard stationed in PATFORSWA have the most state-of-the-art, advanced vessels as they work to build and maintain the necessary regional alliances to ensure maritime security in the region. Building ships for the Coast Guard provides critical assets to bolster our national security and advance America’s interests, both at home and abroad.”

At a PATFORSWA change of command ceremony earlier in the summer, U.S. Coast Guard Atlantic Area Commander Vice Adm. Steven D. Poulin emphasized the importance of the unit, saying, “During these historical times it is important, now more than ever, that we maintain maritime security operations throughout the U.S. Central Command area of responsibility. [PATFORSWA is] pushing forward into the unknown to protect American interests in the region.”

Earlier this month, Bordelon authored an opinion piece on how an expanded U.S. Coast Guard presence around the globe can “help further the regional partnerships and alliances necessary to curb the creeping influence of America’s strategic competitors and adversaries.” Bordelon argues that the Coast Guard has the opportunity to establish itself as the preferred regional partner through its work with PATFORSWA, Operation Aiga and elsewhere. Bordelon concludes that “white hull diplomacy should be looked to more and more as a complementary arrow in the whole-of-government quiver.”

The majority of the USCGC Robert Goldman build occurred despite the COVID-19 global pandemic and six named storms impacting the Gulf region, all of which affected Louisiana and two of which made landfall in the state as hurricanes, including Hurricane Laura – a Category 4 storm and the strongest to hit the state since the Great Storm of 1856. Bollinger undertook precautions to ensure the health and safety of employees and not only maintained its schedule, but delivered the vessel three weeks early.

Each FRC is named for an enlisted Coast Guard hero who distinguished himself or herself in the line of duty. Robert Goldman enlisted in the Coast Guard in October 1942 as a pharmacist’s mate. In 1944 he reported for duty aboard the Coast Guard-manned, 328-foot Landing Ship, Tank-66, taking part in a campaign to re-take the Philippines from the Japanese. On November 12, 1944 a Japanese kamikaze plane flew straight for the men gathered on the starboard side of the LST’s stern.  Goldman witnessed the enemy fighter impact the deck and explode. Goldman’s back was on fire from the aviation fuel, his right leg received shrapnel from the crashing fighter, and he suffered severe shock from the sudden crash and resulting carnage. Disregarding his own injuries, Goldman courageously treated the wounded and dying. For his heroic deeds, Goldman received the Purple Heart and Bronze Star medals.

The FRC is an operational “game changer,” according to senior Coast Guard officials. FRCs are consistently being deployed in support of the full range of missions within the U.S. Coast Guard and other branches of U.S. armed services. FRCs have conducted operations as far as the Marshall Islands—a 4,400 nautical mile trip from their homeport. Measuring in at 154-feet, FRCs have a flank speed of 28 knots, state of the art C4ISR suite (Command, Control, Communications, Computers, Intelligence, Surveillance, and Reconnaissance), and stern launch and recovery ramp for a 26-foot, over-the-horizon interceptor cutter boat.

America is home to some of the finest shipbuilders in the world. This industry is becoming increasingly vital to our national…