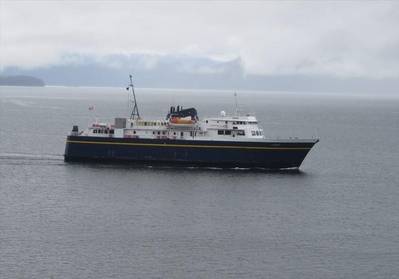 A suspect has been taken into custody following a bomb scare aboard a passenger car ferry in Juneau, Alaska, Wednesday morning.

At 6:49 a.m., U.S. Coast Guard watchstanders received a call from the captain of the LeConte, reporting a bomb threat aboard the ferry scheduled to depart Juneau. Coast Guard law enforcement personnel conducted a security sweep of the vessel and found no credible threats.

The suspect, who reportedly drove a vehicle onto the ferry and made the threats, has been apprehended by Juneau Police Department (JPD) and the vehicle was impounded without incident.

The Coast Guard, which worked alongside Alaska Marine Highway System (AMHS) and JPD to ensure passenger safety and restore service, also established a 1,000-yard safety zone around the ferry terminal to ensure boaters remained at a safe distance until the agencies completed their assessment.

No additional reports of threats or suspicious activity were made, and there have been no reported injuries.

“Our crews train to respond to a variety of situations and take all threats very seriously,” said Capt. Stephen White, commander, Coast Guard Sector Juneau. “This incident highlights the importance of maintaining, exercising, and following security plans. The actions taken by AMHS personnel enabled a prompt response by JPD and the Coast Guard.”

The 235-foot LeConte is a feeder vessel for the AMHS, primarily serving the northern portion of the Alaskan Panhandle. It is designed to carry 225 passengers and has a vehicle capacity of 660 linear feet, equal to approximately 33 twenty-foot vehicles.