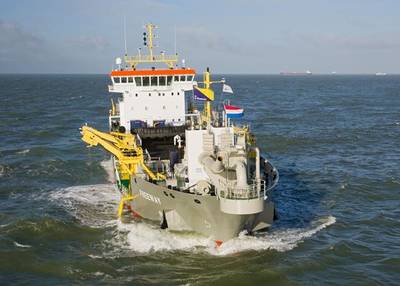 The first contract was awarded by the German Waterways and Shipping Office WSA Weser-Jade-Nordsee. It is for the upgrade of the existing coastal defense on the island of Wangerooge for flood protection to the island’s residents.

Boskalis said the project would be executed with a local German partner and involves the reinforcement of the groins and revetment for which 200,000 tons of rock will be used. In addition to a backhoe dredger, a number of split barges will be deployed. Construction works will start in November 2020 and are expected to be completed in late 2021.

Also, Boskalis signed a contract with WSA Weser-Jade-Nordsee for maintaining a 90-kilometer-long section of the shipping fairway of the Weser river between Nordenham and Bremerhaven. Under a two-year maintenance contract, Boskalis will dredge a total quantity of around 14 million cubic meters of sand and silt, which will be deposited at designated locations along the river. Boskalis will deploy a medium-sized trailing suction hopper dredger to carry out the dredging work that will start early 2021 and last until the end of 2022.

The third contract that Boskalis secured was awarded by Niedersachsen Ports for the maintenance of the port of Emden, one of the largest German North Sea ports. Starting November 1, 2020, Boskalis will maintain the port at the required depth by dredging an annual volume of around 2.7 million cubic meters of sand and silt with a trailing suction hopper dredger for two consecutive years.