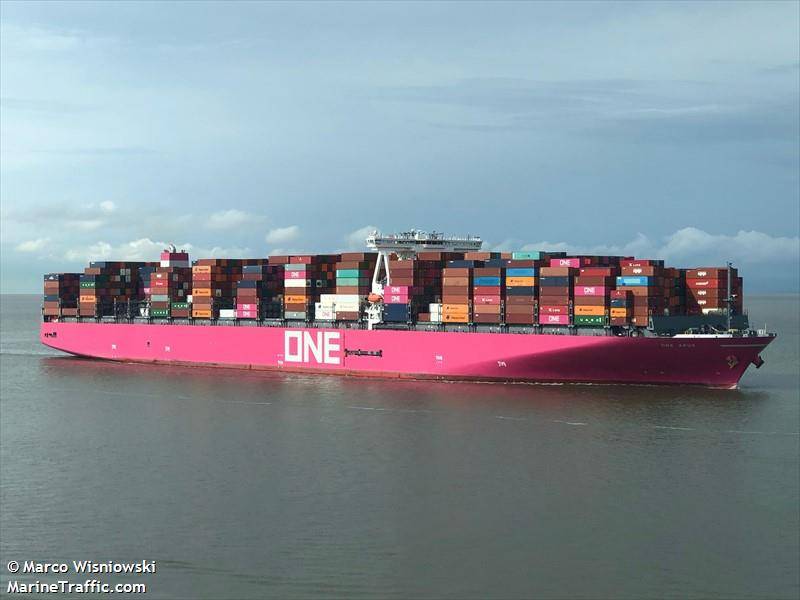 ONE Apus containership - Credit:Marco Wisniowski / MarineTrafficNearly 2,000 containers aboard a ship managed by NYK Shipmanagement of Japan were lost or damaged when it hit by stormy weather in the Pacific Ocean, the company said, adding that the vessel was heading to Japan for assessment.

Such a large amount of container losses is rare in the international shipping industry, averaging less than 1,400 a year in the last 12 years.

ONE Apus, owned by Chidori Ship Holdings, was traveling from Yantian in China to Long Beach, California, when it hit a violent storm about 1,600 nautical miles (2,960 kilometers) northwest of Hawaii, a statement issued on behalf of the companies said.

A swell caused the ship to roll and dislodged containers.

"It is estimated that the number of lost or damaged units could exceed 1,900, of which some 40 are believed to be dangerous goods containers," the statement said.

A spokesman said he had not heard of such a large number of containers being lost in previous incidents involving large container ships.

ONE Apus is due to arrive in Kobe port on Dec. 7 or Dec. 8, the spokesman said.

A 2020 report on container losses by the World Shipping Council found that in the past 12 years, an average of 1,382 containers were lost at sea each year.

The shipping industry transported 226 million containers loaded with cargo in 2019, according to the shipping body.